I truly struggle to get out of bed at 06:30 each day for work, but when my alarm goes off at 03:10 on Saturday I practically bounce out of bed. At 04:20, the hedgerows leading towards the reservoir are littered with Yellowhammers. Mist fills the hollows and creeps behind the hedges. This is a truly beautiful site. As I cross the humpbacked bridge immediately before the meet point, I feel a now-familiar tingle of excitement. What will we see and handle today…what will I learn? And perhaps a little pessimistically, what will I have forgotten?!

Putting the nets up can be like a game of hide and seek, looking for poles and green guys in long green grass is challenging in the half-light. I’m told that I’ve seen nothing yet – just wait until the winter comes when we’ll be fumbling about in the pitch dark.

There’s a buzz in the air as the first net round comes back in. Literally dozens of birds are caught first thing and a good balance must be found between processing the birds quickly and educating us trainees. The quantity of birds diminishes for each net round and soon there is more time for training.

“What age is this bird?” John asks me. I look at the bird and try not to panic. Clearly, telepathy is the answer – please little bird, give me your secrets. And as the weeks progress, the birds do give up their secrets. Eye colour, wing length, counting white spots, analysing growth bars and plumage are just some of the things I’ve learned. Everything is just beginning to make sense when along comes Moult. Ah. Now there are all kinds of different things to understand. I’m sure around about the time I’m getting the hang of this, many of the birds will disappear off on their long migration.

So far I’ve been very lucky as there has been only one wet day in the 8 weeks I’ve been training, forcing us to end the session early. Often though, the wind picks up and we have to take the nets down. Then we’ll ring some Pulli. So far, the chicks I’ve held include tawny owls, tree sparrows, blue tits, great tits, reed warblers, stock doves and jackdaws.

To round the day off, we pop to the local pub together and I indulge in a pint of coke. What else could I possibly want to do on a Saturday morning?

Dawn
Posted by Anonymous at 09:36 3 comments

Saturday 23rd
With cool temperatures, no wind and heavy rain overnight the morning drive to Stanford at 0400 hrs was predominantly through fog and augured well for a reasonable morning’s ringing as I met up with Mick, Mike, Dawn and Ed. We got the nets erected within the hour and on the first round, as I approached a line of three 60’s, I was pleased to see that the first bird to be extracted was a Grasshopper Warbler – excellent, a juvenile on the opposite side of the bay from where we had caught three breeding adults and a juvenile earlier in the year and, what’s more, an adult’s reeling call was coming from only a few yards away.  I moved on to the next bird, another juvenile “Gropper”, and then an adult... By the time I had extracted all the birds in the line I had 5 Groppers and an assortment of other warblers.  Back at the ringing base I was amazed to find that Mick & Mike had brought back two more.  After the next round of nets a further two were brought back such that we had an unprecedented nine Grasshopper Warblers to be ringed in a single morning.  With this year’s total now standing at 13 we need to go back thirty years for comparable figures – 1980 (15), 1981 (17) and 1983 (13)

We ended the day with 92 new birds and 48 retraps: 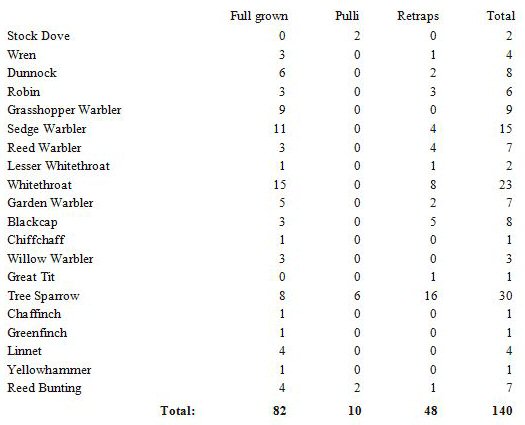 And a Buzzard overhead
Posted by Jacana at 17:32 0 comments

Is this July or November?

What a week this has been for weather - if we have not got wet we have got blown away and if we haven’t got blown away we have got wet and, added to that, the early mornings have been a bit on the chilly side.  The conditions in fact have been more like November rather than summer.  Still we did manage three reasonably successful sessions this week:
Saturday 16th
With heavy rain forecast from 0700hrs it was never going to be a great day for ringing.  Despite previously arranging to meet at 0430 hrs, Adam, Mick and I decided individually to arrive slightly earlier than that in order to erect the nets earlier than planned to give us a slightly longer ringing session such that by the time Dawn arrived (the trainee one that is, not the solar one) several nets were already up.  We took the nets down at 0800 hrs just before the rain started.  With four Stock Dove pulli ringed after the nets were taken down, the combined total of 41 new birds and 31 retraps for the session was a lot less than we would be expecting at Stanford for this time of year when we would anticipate 100+ new birds ringed each session.
Monday 18th
Intrepid Adam decided to have one last ringing session in the main reed bed on his last free day before towing his caravan and family to the Wirral and then onto York – you have been warned – keep a safe distance!  However, half way to Stanford he decided that the wind and heavy rain was just going to be too much and he was forced to turn round and head back home.
Tuesday 19th
Despite the breezy conditions with the occasional shower Masai Mick and I had a reasonable catch of 130 birds (70 new and 60 retraps) which included our second Kingfisher of the year.  We were also fortunate to see a hawking Hobby and a Peregrine – the latter would have gone over our heads unseen if it was not for the noise made by the group of Common Terns mobbing it.
Thursday 21st
Today were joined by Webmaster Mike, who was a surprised by a Badger no more than six feet away from him as it ambled through the hedge onto the reserve.  A catch of 64 new birds with 38 retraps was an acceptable tally for the area between the Draw-off Tower and the “Orchard” with the highlight for us being the trapping of a Pied Wagtail.  Nothing special you might say – well it is for us as it is the first one ringed at Stanford since June 1983.  Eighteen years is a long time!  Although still regular at the Reservoir, they no longer breed – their breeding site was lost when outbuildings used by the on site manager, Bob Smith, were demolished after his retirement and vacation of the cottage.  House Sparrows were also lost as a breeding species at this time and Swallows were similarly affected although a single pair has been successful in some years by nesting under the bridge over the outflow stream.
At the end of a difficult week we have managed 175 new birds and 129 retraps with encouraging warbler numbers of:
Sedge 28 (21)                Reed 10 (5)                   Whitethroat 25 (20)                    Garden 4 (11)
Blackcap 14 (16)            Chiffchaff 7 (1)                Willow Warbler 11 (3)
Whilst these species seem to be having a good year, Lesser Whitethroats appear not to be faring as well.
Two Treecreepers this week brought our tally of juveniles for the year to 13.
Tree Sparrow and Reed Buntings were enhanced by 14 (13) and 28 (11) respectively.
Posted by Jacana at 19:45 2 comments

Saturday 9th
With the weather forecast predicting 9 mph winds with 26 mph gusts from 0400 hrs, we thought of cancelling the proposed ringing session but decided to meet at the usual time of 0430 hrs anyway. Just as well we did - with only a slight breeze all morning five of us covered the “reserve” area of Blowers Lodge Bay and had a rewarding morning’s ringing with 79 new and 61 retraps with Whitethroats and Tree Sparrows still much in evidence -  thanks to Dawn,  Adam, Mike H and Ed. 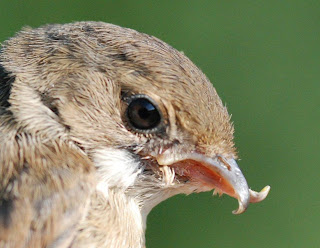 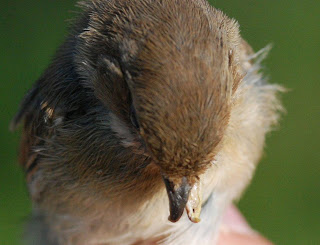 This is our 6th bird with a bill deformity this year and as such we have now had more examples of these anomalies than in all the years combined from 1976. It is also the first year that we have found this to occur in warblers with two Sedge, a Garden and now our second Whitethroat being afflicted.
Posted by Jacana at 08:30 0 comments
Newer Posts Older Posts Home
Subscribe to: Posts (Atom)