Ed has been unable to get to Stanford recently and so tells us what he has been up to:

Over the past few months it’s been quite difficult for me to get along to Stanford so I’ve had to find alternative ways to get my birding fix. One such way is via a photographic project that I started working on in October last year. Nothing special really - I just wanted to photograph a particular Robin that turned up at the stables where my wife keeps her horses.

I noticed on a few consecutive mornings a Robin sitting quite nicely on the old wooden fence posts. I decided it would make a nice photo. The problem was getting close enough. Even with my 400mm lens fitted to the camera, and being particularly cautious in my approach he still proved to be very timid.

Over a period of months I have been feeding the Robin in an attempt to gain its trust so I can get closer.

At first the Robin was very wary, remaining in the trees and hedges until I was out of sight. Whilst I stood in the stables the Robin was content to approach the food and I could watch his behaviour without disturbing him. Over a number of weeks I continued to feeding him twice a day. I eventually got to the stage whereby I could stand outside the stables and he was still content to visit my feeding posts.

Not too much to my surprise in December a second Robin appeared at the feeding posts and was quite rapidly followed by a third. Sticking to my routine of feeding them twice a day and then carrying on with the jobs that needed to be done the birds have now become far more comfortable with my presence.  By January I was now able to put the food out and the Robins would now come within about six feet.  Even if I stopped and stood still to watch them, they didn’t seem too bothered and were quite happy to continue feeding. In February I decided the time had come introduce the camera again and to see how they would react.
All went well; they didn’t seem bothered by its presence in the slightest. On a bright, sunny and snowy day I decide to give it a go at getting some photo’s of the birds. I was hoping to get some action shots of the birds landing on the feeding posts. I was later than anticipated in getting to the stables. I quickly set up the camera on a tripod and placed seed on the post about ten feet in front of the camera.  It only took a couple minutes for them to appear and I was able to get some initial images of them.
Some of the better images can be seen below:
. 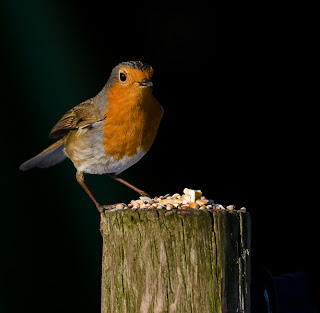 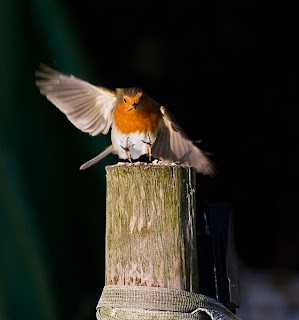 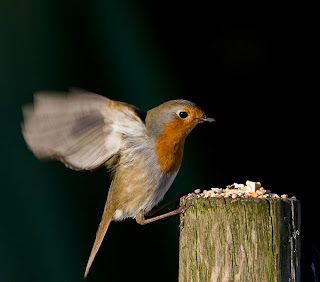 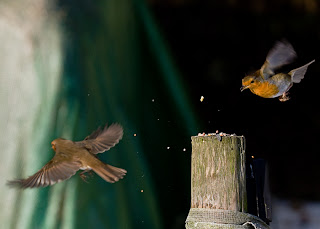