Mick, Peter N and I met on the rail track at 04:30. We put up the nets, added callers and by the time daylight was approaching, it was clear that there were lots of birds moving around. The first round was extremely fruitful and included a beautiful adult Tawny Owl - the first adult I have seen in the hand. I had the pleasure of ringing the bird and soon had some holes in my skin! This was the second adult caught in a mist net this year, but it has been approximately a decade since the last adult was caught in this manner.

On the way back to the ringing station, we met local birder Chris Hubbard who took one look at our bounty and immediately offered to scribe for us. This left Mick free to continue extracting while Peter and I got on with ringing. The spread of species was excellent and as if the Tawny wasn’t enough excitement, we had more highlights to come. Numbers were fantastic: 134 Blackcap, 58 Sedge Warbler, 47 Reed Warbler, 35 Whitethroat, 32 Willow Warbler and 1 Grasshopper Warbler. The day was peppered with Redstarts and we ringed 9 in total. The last round yielded a Yellow Wagtail, which was a lovely way to end the day. The totals for the day were 358 new birds and 14 retraps. With so many birds clearly moving through, we are hoping for another good session on Saturday.

Posted by Dawn Sheffield at 11:15 0 comments

Record Breaking Day at the Res

We have had some good 100+ days recently, as migration has now started. On Saturday 24 August the team, consisting of Mick, Dave, Dawn Stuart and Peter N met up at 0430 at the rail track, and headed off as usual to put up nets from the Feeders to Bench, and all points in between. The night had been clear and still, making it ideal for migration, so we were hopeful we would have a busy day. After the nets were put up, we had time for a brief cup of tea which was just as well, as it would be the last one for a few hours. Time to start extracting.

The first round produced 150+ birds and we started ringing at some speed, whilst Mick went off to start the next round.  Chris Hubbard, one of the Res birders was drafted in to scribe (thanks, Chris). The birds just kept coming, with Mick and Dave extracting for most of the morning. Highlights included 163 Blackcap, 143 Whitethroat, 70 Reed warbler, 38 Sedge warbler, 6 Grasshopper warbler, 6 Redstart, 1 Spotted flycatcher, 3 Lesser Whitethroat and 62 Willow Warblers. We were all amazed by the sheer volume and variety. Even better, Dawn got to ring her first Wheatear, a juvenile. The bird was in the net along the track and is only the 3rd ever caught and ringed by the Group. 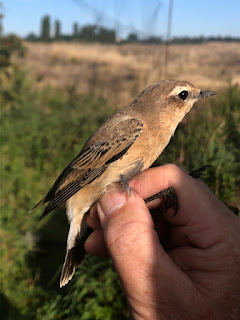 By the end of the session we had broken three Stanford records; annual totals for Sedge and Willow warbler, and the total number for one day, with 526 new birds and 17 retraps. Even at 1200 there was a steady trickle, but we were all in need of fluids, so by 1300 we had packed up and staggered off to the White Hart. A superb morning.