This is in Memory of Alan Crabtree who sadly died recently.
Alan had been the ringer in charge on Cyprus for many years.

Now I know that this entry is slightly out of date as Mick, Denise and myself went to Cyprus in April and May. But it has taken this long for our techni-phobe Group Leader Mick to get me the photographs.
Anyway, Mick and Denise went to Cyprus for approx 6 weeks and met up with Mel Preston and his wife Janet in Polis.  I joined them mid way into their holiday for only a week but what a week I had. I managed to ring everyday. I was there either with Mel and Mick, Bill Jones or a group of ringers from Sorby Breck,  Paul, Steve, Mark, and Geoff.

The star of the trip was a Lesser Grey Shrike which I believe was only the second ringed on the island.

Below are just a few of the birds caught by us during this period. 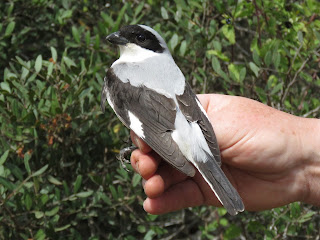 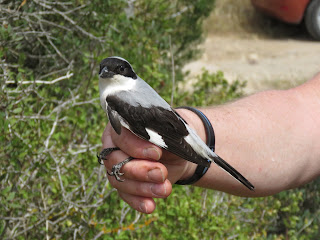 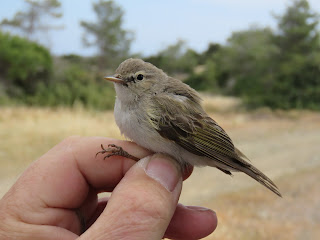 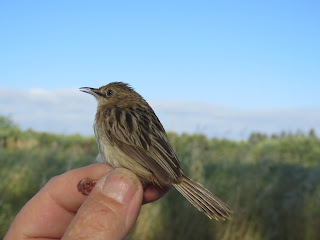 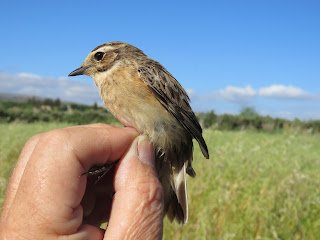 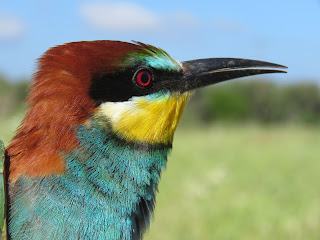 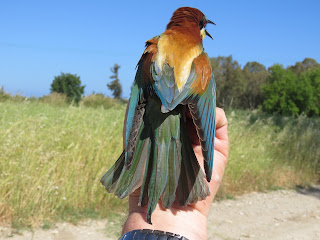 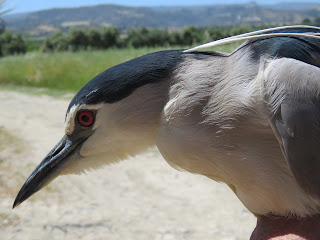 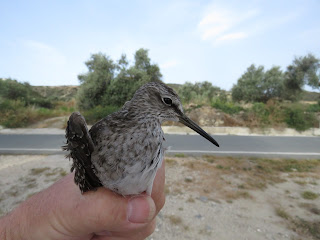 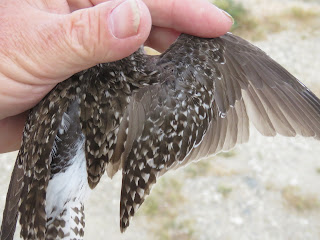 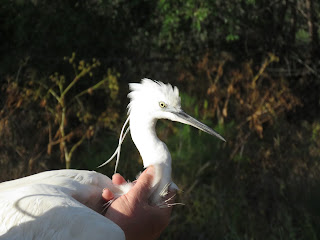 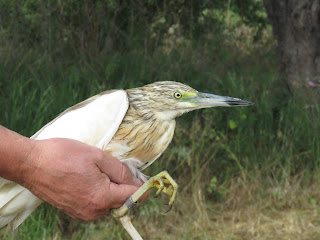 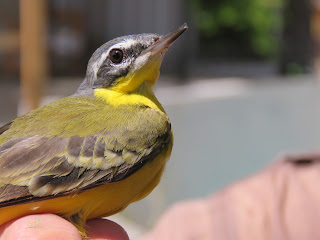 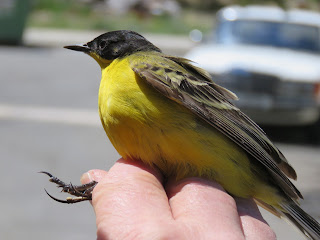 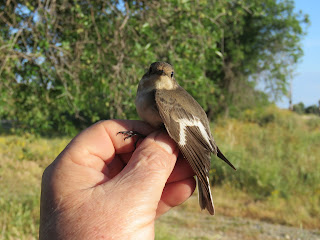 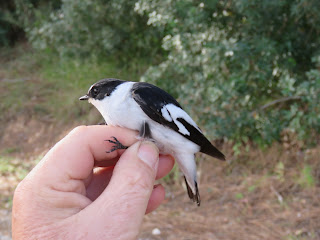 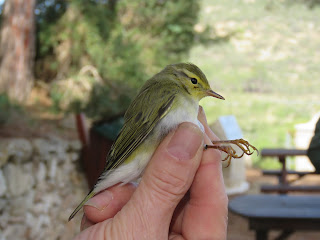 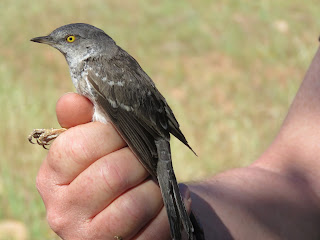 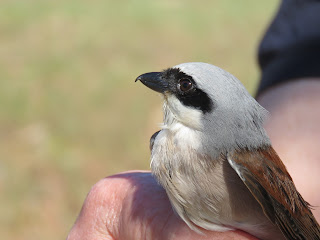 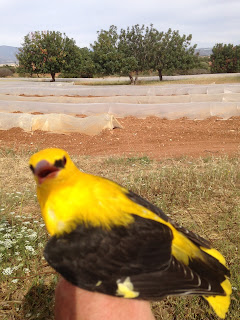 When we were not ringing we either relaxed by the pool or watched other wildlife on the island. 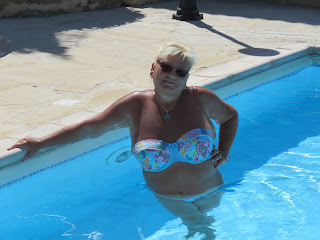 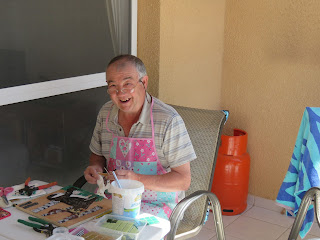 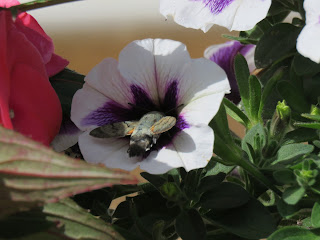 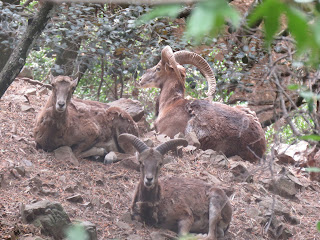 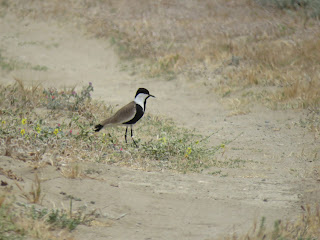 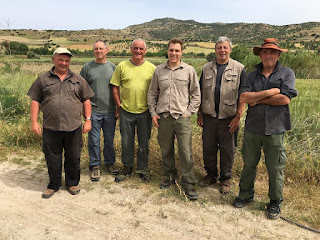 A great time was had by all, and thanks guys for your help and patience.

Looking forward to next years trip.

Again Saturday this week was too windy for ringing, so it was agreed that we should ring on Sunday morning. Mick and Adam valiantly elected to get to the reservoir in the middle of the night and erected nets at 10 rides.So all the rest of us had a lie-in and didn't get to the site until 6am. So myself, Dawn and Stuart trundled down the track to practice our 'fieldcraft ' as Adam calls it. In other-words to try not to wake Mick and Adam.ha ha.  Not really its to be quiet on our arrival with no slamming of car doors etc thus scaring any birds in the area.
On checking 8 of the 10 rides on the first round it appeared to be very quiet with only a small number of birds caught. So Mick went and did the last two on his own while the rest of us started to process the birds. After emptying the ninth net Mick returned to base with both arms full of bags containing the birds. He then went off loaded with more bags to empty the last net. After a while Mick returned ladened with full bags, I had started a second round of nets and found my first net full of chiffchaffs, by the time I had emptied it with Dawns help, Mick had caught up with us and told us to return to the base as they were inundated with birds.So we returned and started processing the birds. That is where we stayed for the rest of the morning, with Mick constantly emptying the nets.
Normally after the first 2 or 3 rounds the number of birds vastly reduces. However today there was large number of hirudines present (2000+), so mp3 bird callers were changed to hirundine.
By midday fingers were sore from removing the rings from the plastic strings and still Mick was returning with large numbers of birds.
But by 1pm all the nets were down and the pub was calling!!!
Todays ringing was absolutely incredible we processed a staggering 380 birds.   of which 370 were new birds.we had 131 Chiffchaff, which is just unheard of. 2 of the Chiffs were controls one of which was ringed in Jersey, Channel Islands. We also had 110 Blackcap ,64 House Martins , 33 Swallows, 9 Reed Warbler, 6 Willow Warbler, 4 Sand Martin, 4 Whitethroat, 2 Lesser Whitethroat and a single GardenWarbler. Plus other odds.
This is a new record for the site, thanks to everyone involve for any absolute fantastic days ringing. 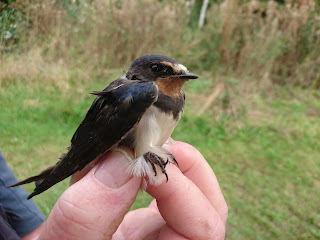 Below is a link to an aerial view of part of our ringing site and the reservoir. by kind permission of        Simon Watts Wild Presentations
www.youtube.com/watch?v=J_XDupccpq8

For anyone who is interested in starting to ring and wishes to join, below is an idea of what ringing is about.           https://www.youtube.com/watch?v=yP-HWntgJjM

The Blackcaps are definitely here.

Well because of the bad weather yesterday the team decided to go ringing today. Adam and Mick got to the reserve early about 3am and erected the nets. That meant that the rest of us Peter, Stuart, Kate and myself could arrive later and didn't have to be there until 6am..
The first two rounds were crazy catching over 100 Blackcaps including 2 controls and 30 odd Chiffchaffs.
We continue to catch a few Whitethroat, Lesser Whitethroat, Sedge and Reed Warblers as they pass through the area.  It was also good to catch one of our previously ringed Cetti's Warbler, and a new Coal Tit which I believe is only our second for the year. After the first two rounds the number of bird caught reduced and it gave Adam, Stuart and Kate the opportunity to check one of the pole boxes containing Barn Owl pulli. We had previously ringed 5 of the 6 pulli about 2 weeks ago. The youngest at that time had been too small to ring.. However today it was large enough and Stuart was fortunate enough to ring his first Barn Owl.
By midday we had taken the nets down and were having some refreshment at our local hq The White Hart.
During the week there had been sightings of Common Sandpipers in the area of the dam..After some discussion  Adam, Stuart, Peter and myself decided to see if they were still around..
On arrival we spotted 2 on the overflow wall. So we erected two nets in the overflow gully and a couple of Spring traps on the overflow wall.
After about 3 hours we had had great success catching 3 new and 1 retrap Grey Wagtails and one of the two Common Sandpiper. Lucky Adam.
At this time of the year we get several stop off during their migration south but we very rarely catch and ring them. The last Common Sandpiper caught and ringed at Stanford was in 1984.

So all in all we all had a great days ringing, processing 210 birds of which 132 were Blackcaps, including 2 controls, 39 Chiffchaffs, 5 Reed Warblers, 4 Willow Warblers, 4 Whitethroat 3 Lesser Whitethroat, 3 Grey Wagtails, 2 Sedge Warblers a Coal Tit, the Barn Owl Pulli and of course the Common Sandpiper. 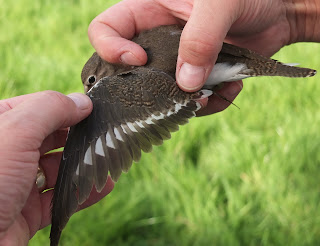 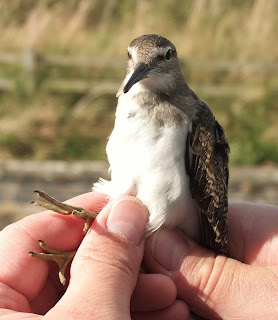 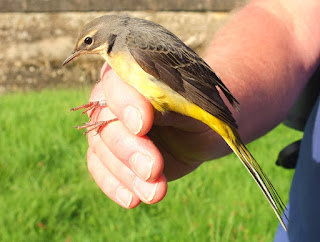 As i am sat here watching the rain rather than birds raining down on the nets i thought i would give you a bit of an update on our early September efforts. We have been out on 5 occasions ringing a total of 807 birds of 24 species,73 retraps and 2 control Sedge Warbler, not a bad effort at all. As you would expect at this time of year the warbler species have been our main quarry and they have not disappointed with Blackcap (443) and Chiffchaff (126) being the bulk of the catch. Generally speaking September sees the other Warblers tail off sharply, so after the exceptional Whitethroat catch of last month we are not surprised with only 60 being ringed so far. Both Sedge and Reed Warbler are doing quite well with 40 and 37 respectively, Willow Warbler (15) and Garden Warbler (2) have both had disappointing years and September is certainly not helping. Lesser Whitethroat (14) however are making a late season surge and finally Grasshopper Warbler have continued to make a showing with 2 being caught so far. After last years exceptional passage of Redstart again we have managed to catch 2 so far. We have not caught anything else of note so far but here's hoping for the rest of the month. Mick.
Posted by AGH at 10:59 0 comments

August Summary
Well August has been and gone in a blur here at Stanford Res with some 1531 birds ringed during the month we had highlights a plenty. To start with I have to say this is the highest August total we have ever had and bettered last year by about 300 birds with a visit less. So unlike the rest of the year to date we can not moan about their being no birds about. The warblers seem to have recovered a little from their early season disaster when most first broods just did not make it through the June monsoon's. Cetti's Warbler are continuing to colonise Stanford with some juvenile birds present at long last from at least 8 females caught showing signs of attempting to breed, what a brilliant result as they only started to breed at Stanford last year. Grasshopper Warblers have returned to Stanford with a vengeance this year with at least 4 pairs present so the 11 new birds caught this month were not to be unexpected. Reed and Sedge Warblers both did well this month with 85 and 173 birds ringed respectively. All the other Warblers species have shown a downward trend except Whitethroat, which have surpassed all previous records. We have ringed more Whitethroat this month than we have ever done in a year before with some 577 being ringed bringing the total for the year to 799. Quite unbelievable. Numbers wise apart from the Warblers everything else apart from Robin with 49 being ringed this month have been a spectacular flop with smaller numbers than usual being ringed. However we have had some nice birds caught for the month with Redstart and Spotted Flycatcher being two of them. But the most unexpected was the Wryneck that we caught on the 26th. This is the first to be ringed at Stanford and I can report that Peter the Trainee who was with me and therefore ringed it is still buzzing a week later .There's nothing quite like a good bird on your own patch and someone to share it with !!!!!!