Well after a brilliant September! Hopes were high for October to be as good but with only 720 birds ringed this represented just under half of last years total for the month. With constant winds coming from between South through West to North West and periods of rain as well we felt we were constantly battling the weather conditions. With the weather how it was it was not surprising that the expected  Blackcaps and Chiffchaffs petered out very quickly with only 38 and 84 respectively being ringed this month, well down on previous years. Goldcrests moved through in smaller numbers this year with 54 being caught, in contrast Blue and Great Tits moved through in greater numbers than usual, probably reflecting the good breeding season we had here. During this period we also managed to ring 4 Coal Tits which is good for our site. Adam tried a roost catch in the Reedbed managing to catch 15 Starling and the only Reed Buntings (6) for the month. With all the Finches and Buntings well down in numbers the month just faded away. During recent years October has brought increasing numbers of Yellow-browed Warblers to Britain and both Leicestershire and Northants have had their fair share despite being as far from the sea as you can get. During this period Stanford has managed to catch 2 and observed another so you could say Stanford is a bit of a local hot spot recording 3 of the 9 records for Northants. Incredibly, we also caught the first for Northants at Naseby and Adam had one in his mothers garden in Corby so during the middle two weeks of October we get out as much as possible in the hope of catching more, this year being no exception. So with that in mind a small break in the weather on the morning of the 19th before more rain was due I decided to go out for a short session. What a great decision I made! Although it had been a poor morning numbers wise the last bird extracted was exceptional. As it was proving very slow that morning and the weather was closing in I decided to pack up. When reaching the last net I noticed a warbler in the bottom shelf with its back to me, as I walked past it to turn the tape lure off I thought "oh, a late Reed Warbler" so you can imagine my reaction on my return to find it was in actual fact a DUSKY WARBLER !!!! Absolutely amazing and probably out best species to date. I quickly text a local birder who was on site within 10 mins who took all the published photographs. An article along with photo's can be seen on Northamptonshire Bird Sightings web page.

It's been a funny September with us achieving our best ever months total of 2532 new birds ringed from 14 sessions, an average of 181 per session. What an achievement for this truly landlocked site! Our lowest catch was 66 on the 4th and our highest was 448 on the 2nd whilst the weekend of the 9th/10th produced 2 exceptional catches of 338 and 320 respectively. Under 10 retraps from the previous day also demonstrates how quickly birds are moving through at this time of year. At the beginning of the month we went through a period of time when each session we seemed to catch a Redstart resulting in 7 for the month and a total of 15 for the year which is excellent for us as no Redstarts breed in either Leicestershire or Northants. The 'bread and butter' species for us at this time of year are Blackcap and Chiffchaff, two short distance migrants that winter mainly in the Mediterranean basin. This year catching 1255 and 519 respectively. This weekends catch of Blackcap sends us over our best yearly total for this species and also being our first species to go over 10000 ever caught. The top 5 species ringed at Stanford are Blackcap 10080, Blue Tit 7845, Whitethroat 6460, Great Tit 6046 and finally Chiffchaff 5713, this is in stark contrast of when we first started ringing at Stanford in 1976 when Blackcap and Chiffchaff were infrequently caught. In fact after 10 years of ringing at this site we had only ringed 138 Blackcap and a paltry 45 Chiffchaff. How times change!. Again, this year we have caught 10 species of warbler to date resulting in 4112 new birds so far compared to 4560 last year. With about 2 weeks of warbler catching to go and weather willing we may just equal last years warbler total. Finally, where have all the Blackbirds gone? We are just entering October and we have only ringed 19 this year... in fact we have ringed more Song Thrushes with 20 being ringed. Very concerning indeed! Mick 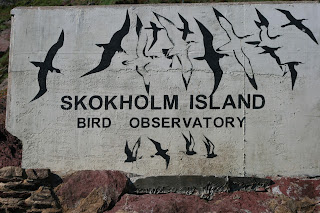 A group of five from the ringing group went to Skokholm Island bird observatory for four days.
We set off on the Sunday to stay at a lovely B&B near to Martin Haven. There was a possibility that we would get an early crossing to the island on Monday morning, however en route to Wales I received a call from the warden Richard stating the crossing would be delayed until 1630hrs because of the weather.
Monday came and we managed to get across to the island where we were greeted by Richard, Giselle, Katy, Holly and Jacob. 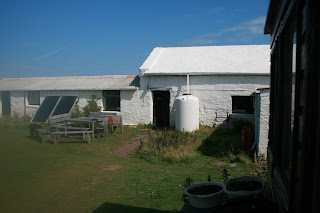 After a briefing from Richard we were shown the nets, Heligoland traps and other equipment. That evening we were planning to catch Storm Petrels at the South Haven so we helped to erect a couple of nets near to the landing area. 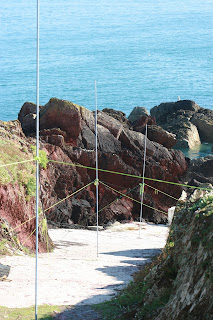 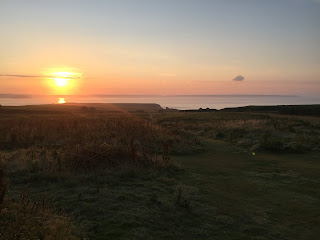 It was an excellent evening catching and processing over 260 Storm Petrels and for some a new experience of extracting birds from nets in the dark. We were in bed by about 3.30 am and then up again at 0600 opening the other nets near to the buildings and ringing the smaller birds on the island. 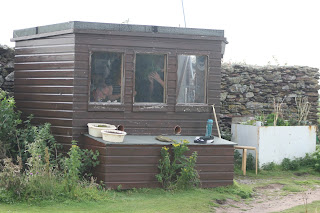 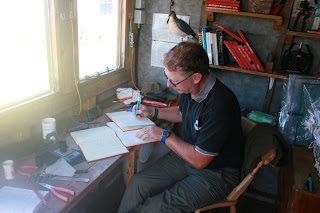 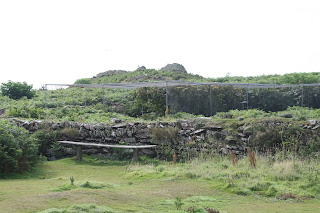 Tuesday evening we were due to catch more Storm Petrels but due to the high wind we had to cancel. So we had an early night.

Wednesday was a bit of a wash out with very little ringing carried out until the evening
when we caught Manxies. We spent some of the dry time trying to find Puffin chicks in their burrows. But were unfortunately unsuccessful. 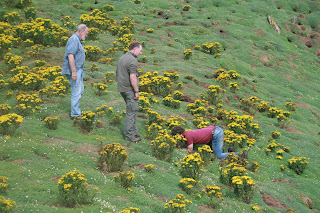 From about 23.30 -02.30 we were out catching Manx Shearwater, either by hand or in a small hand net. These are fantastic birds that breed on the island in their 10's of thousand, and then after raising their chick, fly south towards South America. 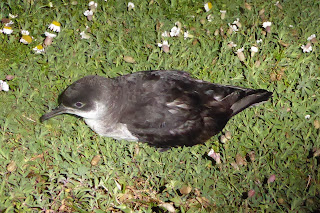 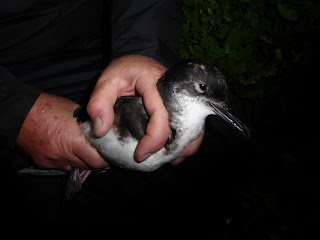 We manged to process 47 birds.

Thursday was again a windy day with very little mist netting carried out. However we did manged to catch a few juvenile Lesser Black Backed Gull by hand, which was a new species for some of the group and more Manxies in the evening. 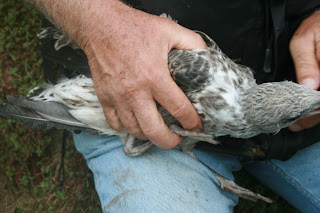 Friday was another wet day with next to no ringing carried out. However Kate did manage to catch one of the elusive Wheatear that had been teasing us by not taking the bait in the spring traps. Although the day was wet we did mange to see other occupants of the island. The wind, swell and tide prevented us from getting off the island  today. 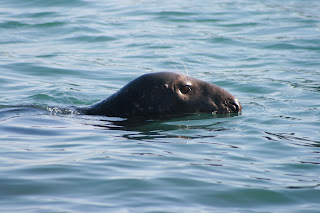 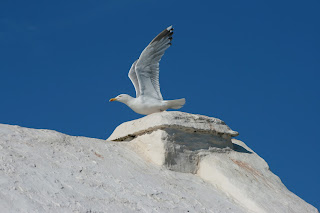 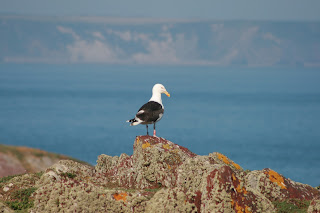 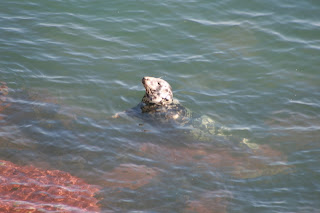 Saturday was a beautiful day although again too windy to open all the mist nets.
Peter had brought his whoosh net over onto the island and had had a couple of unsuccessful attempts at catching gulls(they were too weary of the net). But this morning he manged to catch a 2nd year Jackdaw. By lunchtime we were packed and transferring our luggage to the jetty.
Putting the bad weather conditions aside (which definitely restricted our mist netting and Storm Petrel catch) we all had a fantastic time on the island and were very sad to leave.

Our thanks to Richard and Giselle for their assistance and hospitality.  (Pub quizzes will never be the same).

In total we processed 550 birds of which 260 were Storm Petrels and 140 were Manx Shearwaters. 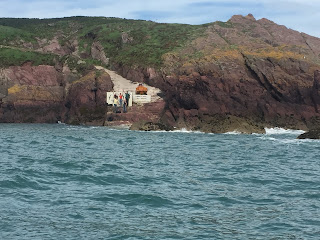 Stanford reservoir is usually kept pretty full of water. This means there is little mud to attract waders and almost no chance of them breeding. This year however, there is work being done at the dam end, which means the levels have been lowered dramatically over the spring and this will continue well into the autumn.

This has kept our resident birders in a continual state of frenzy, chalking up Black Winged Stilts, Greenshank, Dunlin, Ringed Plover, Grey Plover, Turnstone, Ruff, Godwits and Spotted Redshank, amongst others. Both Lapwing and Little Ringed Plover have bred successfully thus far. On Tuesday 30 May, Mick, Adam and Peter N met up to explore the possibility of ringing some of the chicks. After observing the LRP on the Leics side, Mick noticed that the mother had both chicks with her. This was a great opportunity and he successfully retrieved both. We quickly slipped rings on and released them!

We then had a look for the four Lapwing chicks but the parent was keeping them well off shore, beyond our reach. Elsewhere we have started the Constant Effort Site sessions again. The warblers have returned but despite having a record breeding season last year, our Grasshopper warblers seem to have forsaken us, possibly due to adverse winds during the migration period. The Cetti’s on the Northants side seem to be absent too but they do seem to have survived on the Leics side, so with luck they will breed and spread back. The site can still surprise us however, and last week on CES duties we ringed an otherwise unheard of spring Spotted Flycatcher! Bring on the rarities!

Yes, it’s that time of year again. The SRG hordes are out every Saturday morning armed only with with loppers, saws, Thermos flasks and sundry other tools to to cut back the scrub which has grown up over the year at Stanford reservoir. We’ll be doing this, weather permitting until April. This promotes a dense undergrowth in spring at the reservoir. To explain why we do this throughout the cold and damp months, here is a quote from a letter kindly sent to us by one of our regular birdwatchers:

‘There was a late spring evening last year when I stood quietly at the back of Blower’s Lodge Bay. From this one spot, I could hear Grasshopper Warbler, Cetti’s Warbler, Lesser Whitethroat and Garden Warbler, plus the usual ‘commoner’ species.
This diversity is a testament to the hard work the group puts into managing the habitat’.

What a kind thought! This is absolutely true, the warblers (and indeed many other birds) love the dense undergrowth generated following scrub bashing, where they feel secure to nest and bring up their young; so we feel our effort is very well spent. Please note that readers are very welcome to join us in this endeavour- contact details can be found on the SRG main web site (a link can be found on this page on the right).
Following a morning’s bashing, we had our annual shin-dig on the 21st January at our spiritual home, the White Hart in South Kilworth, with SRG members and various partners. Here is the commemorative picture of the event- those of a sensitive nature may wish to turn away now…