A Record Day and a Day of Records

It was 0500hrs as my ex-military Land Rover slowly chugged towards Stanford - I was in no hurry as I had left home in plenty of time for the 0530 am meeting at the disused railway track entrance.  As always I had Skye, the SRG mascot by my side - his head hanging, in characteristic pose, out of the window.  As we entered the mist pockets that had formed in the dips and hollows in the road and the headlights illuminated the autumnal colours of the roadside shrubs and hedgerows I was reminded of Keats’ acclaimed poem to autumn.  “Season of mists and mellow fruitfulness” the first stanza begins – yes September is a lovely soft focus time when the fruits and berries begin to ripen, the leaves take on their rich and colourful hues, early morning mists and spiders webs hang with glistening dew.  The dew was certainly sparkling on the Landy’s bonnet-mounted spare tyre. 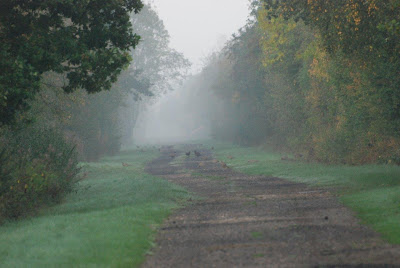 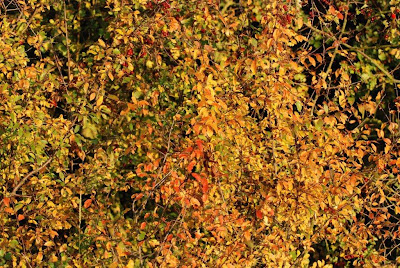 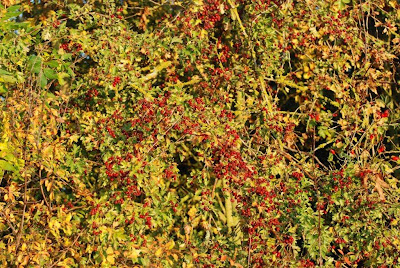 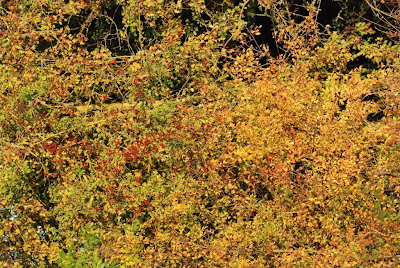 
Not a breath of wind – my thoughts turned to ringing. These were good ringing conditions and maybe, just maybe, we might trap the 49 new birds needed for a record breaking monthly total of 1,000 birds.  As the Landy turned into the railtrack entrance fifteen minutes early the gate had been unlocked and was wide open.  Masai Mick had arrived early too.  Seconds later our Webmaster, Mike arrived - the gate was locked behind us and we made our way down the railtrack towards the reservoir gate.  In the dark, nets were allocated and off we went - I was to erect the “feeder nets”, Masai Mick would set nets to the right of me and Webmaster Mike would set those to the left.  Half an hour later those nets were all up, the feeders had been refilled  and Mick and Mike went about erecting four nets in the adjacent field to target Meadow Pipits whilst I set up our base camp.  It was now daylight and a few minutes sit down, a quick slurp of coffee was followed by the first round of the nets.......


39 new birds from the first round consisted of 26 Blackcaps and 8 Chiffchaffs.
We were going to make the magical 1,000th bird for the month with ease!  The second net round gave us 51 new birds but after that the numbers dropped considerably demonstrating without doubt that (at Stanford certainly) you need to get the main nets up whilst it is still dark before the birds continue their migration south.  The Meadow Pipits never showed, only four were ringed but the final tally was 134 new birds and 10 retraps which included the late Grasshopper Warbler ringed five days ago and a new Reed Warbler. 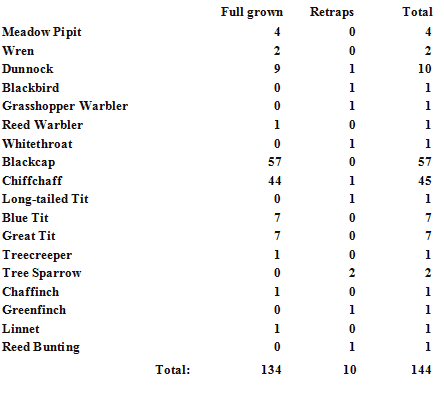 The 57 new Blackcaps is a record number caught in a single day (previous best 32) and pushed the already massively high annual total for this year to two short of 600 swamping the previous record of 266 set last year.


The 44 Chiffchaffs ringed is also a record daily total easily surpassing the 26 of just two weeks ago and giving us a record for this year so far of 327 (previous best was 248 last year).


We had trapped just over 900 of these birds migrating south through Stanford and not a single control amongst them - is anybody ringing these north of Leicester?


A record year for Dunnocks too – the 9 today gave us an annual record of 104.


The total of new birds at this one, magical site for this month is 1058 with one more session planned for Friday.  A monthly total that surpasses many of the annual totals that we have had in the 35 years we have been ringing here.


Today’s birds also pushed our database through the 100,000 mark.


Truly a remarkable record-breaking day.
Posted by Jacana at 21:27 0 comments

Late Warblers and a Sparr

Masai Mick, Adam and I were joined by Ed, Debbie and husband MAL at Stanford on Saturday.

For a change the weather conditions were perfect for a good morning's ringing with no wind at all and an overcast sky (needless to say not all what had been forecast!)

We managed 72 new birds with 14 retraps - a tad disappointing given the conditions but the reward was some late warblers and our second raptor of the week - a female Sparrowhawk.
Amongst the new birds were 4 Goldcrest, 8 Chiffs, 26 Mipits, 12 Blackcap, 2 Garden Warbler, 2 Lesser Whitethroats and a Sedge Warbler.

Debbie's husband MAL, a keen photographer, took this image of the SRG Mascot about to devour his favourite treat - a morsel of sausage.

Masai Mick and I met at Stanford this morning at 0530 hrs for a leisurely morning’s ringing. With a chill to the air but relatively calm we set the nets to target Blackcaps, Chiffchaffs and Meadow Pipits.
Steadily the birds came and before we knew it, with 28 Blaca, 15 Chiffs and 34 Mipits, we had broken the record annual totals for all three target species which coincidentally were all set last year.
This year’s totals for these species are now:
Blackcap         509   (263 in 2010)
Chiffchaff          258   (248 in 2010)
Meadow Pipit   128   (30 in 2010)
Amongst these was the 500th Blackcap of the year:
With all nets down by midday we totted up to find that we had processed 104 new birds (which included a late Grasshopper Warbler that came up from my size twelves straight into the bottom shelf  less than three feet away) and 12 retraps – some leisurely morning that was!
Posted by Jacana at 18:53 0 comments

In yet another week of howling hoolies and rain we sneaked an unscheduled ringing session this morning during a gap in the weather.


A rather good session resulted in 90 birds caught of which 73 were new. Blackcaps (18), Mipits (18) and Chiffs (12) made up the bulk of new birds with a supporting cast of odds and ends including a late Lesser Whitethroat.
﻿ 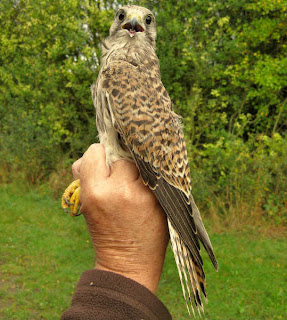 Star bird of the morning was this Kestrel, caught in the bottom shelf of one of our Meadow Pipit nets. To make things even more exciting, it was a control!
Posted by Anonymous at 14:22 0 comments

Masai Mick sums up another week of poor ringing weather
Well weather wise we got off to another awful week with strong winds on both Monday and Tuesday making it impossible to ring.  Wednesday was not a great deal better but I had had enough of sitting around at home by then so off I went to Stanford.  I was home by 10:30 having caught 43 birds, 39 being new - these were mainly Blackcap and Chiffchaff but I also managed to catch our first Meadow Pipit of the year.
Thursday dawned with not a breath of wind and stayed like it all day.  Just as well as it is one of our usual ringing days and Jacana John and Adam joined me for what turned out to be a great morning’s ringing. We managed 154 birds of which 133 were new and again Blackcap and Chiffchaff dominated the catch but surprisingly we also caught 47 Meadow Pipits which is a staggering number for us, as our best annual total to date is only 30 birds.
Flushed with Thursday’s success I could not resist going out on Friday catching a further 89 birds for my trouble - 80 of these were new birds with another new species for the year being two Lesser Redpolls.  These are really nice finches that I look forward to catching each year, usually in October, so these two individuals were slightly early than usual.
The final session of the week took place on Saturday and we managed 63 birds caught with 56 being new. Nothing was caught that we were not expecting – it was just more of the same but the wind with the odd sudden light rain shower was becoming tiresome to say the least. It was very good to welcome Dawn back after her recent stay in hospital and a pleasure to meet Andy who will be acting as her chauffer for a while.
The week's totals: 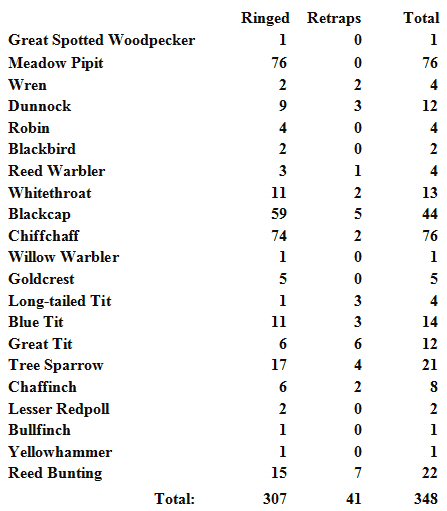 What a week we have just had for cr** weather – it’s done nothing but blow a hoolie all week.
Ringing sessions could not be planned at all so it was just a matter of getting up and having a look and making a decision then.  So on Monday I headed out for a quick session leaving the house at 5 o'clock in order to get the nets up before first light.  I do have to say that when I arrived at the Reservoir it did cross my mind that I must be mad as the wind was whipping along the railtrack.  Anyway nothing ventured nothing gained.  So the nets went up and then came back down again shortl;y afterwards such that I was home for 9:30 having caught 24 new and 5 retraps -  not a great total but I did manage to ring a first year male REDSTART the first since 2008 and only our 15th since we started in 1976 .
Wednesday was even worse for weather and therefore numbers - only 18 new and 3 retraps - DIRE!!!!
Friday’s forecast was for better weather so off I went again this time with Jacana John and Adam along for company.  A much better day with 58 new 21 retraps and the Blackcap numbers had picked up again with 24 caught and the first real movement of Chiffchaff this autumn with 16 caught.
Finally we were out on Saturday for the last fling of the week, again in trying conditions, but this time we managed 56 new with 29 retraps.  Again we had lots of Blackcaps (ringing our 400th for the year – a new record) and Chiffchaff with 17 and 18 respectively.  The highlights of the day were two late birds – a Grasshopper Warbler and a Garden Warbler as both these species have usually left Stanford by the third week in August.


The totals for the week are 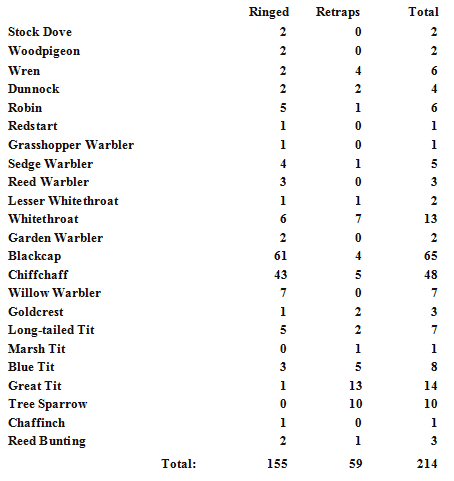