A Day of Juveniles

Our ringing sessions are normally on a Saturday morning, but this weekend Saturday was far too windy to be ringing so the decision was made to ring on Sunday. Well we met at 4.30 at the rail track gate. Mick was back from yet another holiday, this time in Scotland and the Orkneys, and together with Adam, Max, Peter and myself we went and erected the nets between the feeders and the Northants reedbed. We made our base at the bench midway between the reedbed and the feeders. After all the nets were up Adam, Max and Peter went one way and myself and Mick went the other. As soon as we started extracting the birds from the reedbed and the point nets, it was obvious we were going to have a large number of birds to process. We actually ran out of bird bags so I took the birds back to Adam and the others, for them to process while I returned to Mick with more bags to carry on extracting. Moments later I returned to the ringing base with  another arm full of birds. Mick had given me one bird that he won't ID  saying you'll have to ID it back at the ringing base.
At the base I took the bird out of the bag and I have to admit was baffled, as were the other trainees. So with Adams assistance we ID'd the bird as a juvenile Yellow Wagtail. We do not catch many Yellow Wags and normally in the Autumn migration, the last being in 2014. 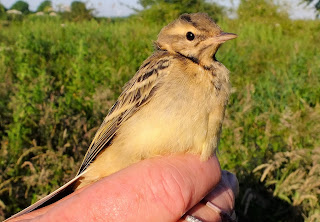 The session continued with 4 of us ringing while Mick continued extracting the birds from the nets. Max who has only just started ringing had a baptism of fire with numerous new species for him to ring, including a juvenile Great Spotted Woodpecker.
As the day progressed and the number of bird caught reduced, Adam and Peter checked some nest boxes and in total ringed 16 Tree Sparrow pulli.
We had an extremely good days ringing having processed 194 birds, many of which were juveniles, including a young Cetti's Warbler. 133 were new and 61 retraps including 2 controls. 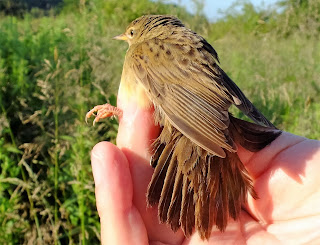 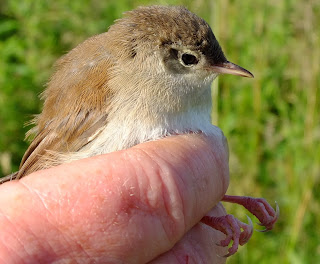 By the end of the day we all needed to retire to the pub for a well earned drink..