Minding your P's and Q's

Our group was given another lie-in on Saturday morning courtesy of Mick who again arrived at the res early to erect nets and get the tape lures on before sunrise. Simon - a former trainee - visited us again this week to complete filming our activities. Happily, there was plenty to record because when the fog lifted, the captures rose sharply. Dave, Peter and I carried out the ringing while Mel and Mick did continuous net rounds keeping us with such a constant supply of birds that it was after 10:00 before we were able to grab a coffee and a bite to eat.

Simon was in need of some audio for his film - us giving the data to the scribe. As a group, we do enjoy a bit of banter between birds and when he began recording, minding our P's and Q's was rather a challenge! There was a collective sigh of relief when he had filmed enough and we could talk normally once more, lol.

Hats off to Adam and Dave for staying awake...Adam came out a little later after finishing night shift and Dave had pulled an all-nighter too, though in a much more pleasant way after a night's ringing with the Wash Waders. As well as Simon, local birder Ian popped in for a while. They couldn't have picked a better day to join us. We captured 186 new birds including 47 Chiffchaff, 10 Lesser Redpoll, 7 Meadow Pipit, one each of Whitethroat and Lesser Whitethroat followed by an assortment of more usual species. The top scorer of the day was 93 Blackcap including a Portuguese control, our first from this country. The day was concluded with the usual trip to the White Hart. 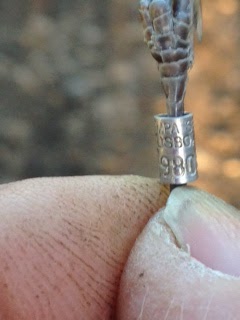 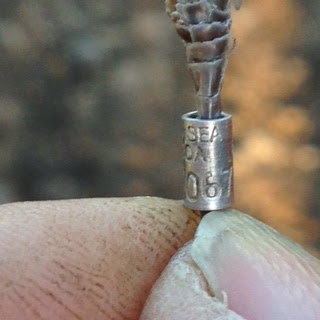 Posted by Dawn Sheffield at 23:56 0 comments

Well the Autumn migration continues and you have to admire Mick's commitment. He continues to arrive at Stanny in the early hours to erect the nets in the dark and to get the sound lures on. This week, due too the weather and other personal events, Mick only managed to get to the reservoir 5 of the 7 days. Ha ha.  We continue to catch good numbers of Blackcap and Chiffchaff. The totals for this week were; Tues (57), Thurs (112), Fri (132), Sat (206) and Sun (144).
Mick was on his own on Tuesday and Thursday. He had spent all last week texting me and light-heartedly winding me up about the Redstarts. Fortunately last Saturday we caught one and I was able to ring on it. So I thought at least there will be some rest from the text. Oh no! This week he's at it again and Thursday he surpassed himself. In the 30' net though the hedge on the railtrack he caught a young Whinchat. This is only the second Whinchat ever caught at Stanny, the first being in May 1981, 34 years ago. so a fantastic result .
On Friday Peter managed to get out and help Mick. On Saturday myself, Dawn, Peter and Mel arrived at 0615 and trundled down the track and met up with Mick, who again had arrived early and already put the nets up. As soon as I saw Mick  I accused  him of making up the story of the Whinchat but he assured me he had photos.  Indeed he had, but unfortunately I can't attach them at the minute because Mick is such a technophobe that he doesn't know how to email them across to me.( He has to get the services of a young girl to do it for him) As soon as I get them I'll attach them to this post.
Dawn was in fine form and relayed stories from her holiday in Majorca and in particular Albufera Nature Reserve.
With 4 of us ringing we managed to keep on top of the number of birds, the total for Saturday were:
Blackcap (122), Chifchaff (57), Reed Warbler (6) ,Sedge Warbler (2), Meadow Pipit (2) and singles of Lesser Whitethroat ,Whitethroat, and Garden Warbler.
The track where we base ourselves got a bit busy with hundreds of horses participating in a local charity horse ride, organised by the wife of one of our old ringers (Ed).
By 12.30 we had the nets down and en route to our HQ at the White Hart. It was definitely Micks week because not only had he caught the Whinchat, he won the draw in the pub and took home a BBQ pack of meat.
On Sunday just Mick and Adam went out and again got good numbers of Blackcap and Chiffchaff.
Late yesterday there was a sighting of a Wryneck, close to Stanny, so today Adam and Mick where out looking for it but were unsuccessful.
Hooray!!!
What a pretty bird. 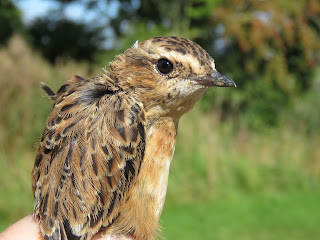 Just to prove he did catch one.
Posted by David at 20:18 0 comments

What a start to September?

Well this week the migration has been in full swing and so has Mick. Unbelievably he has been out before dawn to set all the nets on every day this week other than Saturday. And that was only because it was raining. Because of either work commitments or people swanning off on holiday (Dawn), Mick has been out to Stanny on his own Monday to Friday. What a week he has had, each day having a respectable number of new birds.  Monday (159), Tuesday (110), Wednesday (55), Thursday (79) and Friday (113).  In that 516 birds were 5 new Redstart. These birds are not common visitors to Stanford and we are very lucky if we catch 1 a year, so 5 in 1 week is incredible.  He also caught a migrating Grasshopper Warbler which is a new species for us for the year. Unfortunately numbers of this species have been reducing over the last few years.
Saturday was a wash out and it was decided not to attempt any ringing. So ringing was planned for Sunday. The weather forecast was perfect with a clear night and very little wind. Mick had noticed that on these type of nights the number of migrating birds were high.
With Dawn still sunning herself, Adam going out on the razz the night before and Jo with family commitments the team was Mick, Peter and myself. At least that was 2 more than had been there for the rest of the week. To make it even better Mick volunteered to get all the nets up before dawn and myself and Peter trundled up at 06.15. Fantastic a lie in.
Boy did we need it!!!!! We met up with Mick. No time for coffee, off we went on a net round.
Mick had put 13 nets up and by the time we had reached halfway we knew it was going to be a brilliant day. Myself and Peter returned to the vehicles and started processing the birds. Mick continued extracting birds from the remaining nets. On Micks return to the vehicles he presented me with a single bird bag stating 'this is for you'. With excitement I placed my hand in the bag and took hold of a young female Redstart. The 6th of the week !!!!! I was really pleased because I had never seen a Redstart in the hand before and certainly never ringed one. Mick knew this and all week he had been texting me stating that he had caught a new Redstart and on one day even caught 2! He'll have to think of another bird to try and wind me up with now.
The day continued in this manner. Mick was extracting and Peter and myself ringing. Very little time for coffee!!! By the end of the session we had ringed 237 new birds and had had 6 retraps one of which was the Grasshopper Warbler from earlier in the week. The birds to note were 50 Chiffchaff and 123 Blackcap., but we also had good numbers of other species
Sedge Warblers (3). Reed Warblers(9). Lesser Whitethroat (3). Whitethroat (6). Garden Warbler (3). Willow Warbler (6) Goldcrest (4) and of course 1 Redstart.
All in all a  --------------------------SUPER SUNDAY AT STANNY

For those that are interested the groups annual report for 2014 is now published, and can be seen on our website.
Posted by David at 18:13 0 comments

After a dismal July, August has been truly magnificent at Stanford Res. After last years record August of 833 we were hoping to get somewhere near that this year, instead we just smashed it with a 50% increase to 1233 birds ringed from 15 visits with all Warbler species showing a healthy increase. 33 species were ringed during the month, 8 of which showed a small decrease. Chaffinch with a 60% and Reed Bunting 45% being the worst. On the bright side all the warblers showed a healthy increase in numbers of between 34% and 60% except for Willow Warbler which was still up 12%. Lesser Whitethroat numbers were amazing with 64 caught this month, that's more than in most years!, together with Blackcap up from 93 in 2014 to 202 possibly due to an increase in breeding numbers after last years good breeding season. We also managed to catch a Tree pipit during the month which is only our 4th in 40 years and finally at the end of the month we caught a Pied Flycatcher, the first ever to be caught at Stanford. So all things considered we have had an excellent month, we hope it continues. Mick
Posted by AGH at 21:41 0 comments
Newer Posts Older Posts Home
Subscribe to: Posts (Atom)