Fantastic to be out and ringing again. Scrub bashing is over and we are starting regular Saturday sessions. Ringing is a bit hit and miss this early in the year, but we are pleased to report a good return of our migrants. Warblers are our speciality and we have already ringed Blackcap, Chiffchaff, Garden, Grasshopper, Willow, Reed, Sedge, Whitethroat and Lesser Whitethroat (a personal favourite), as well as our local overwintering birds. 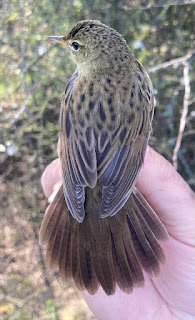 On Saturday 30 April, Peter Mick and Stuart were out bright and early and put up nets from Church to Berries, a total of 15 nets. Pete B joined us a bit later. Numbers were decent for the time of year, with 16 new and 28 retraps. Whilst having a tea break, Stuart noticed a Robin busily returning to a nest just behind the ringing station (i.e. Mick's Kia). Mick promptly retrieved three pulli (nestlings), which Stuart ringed: 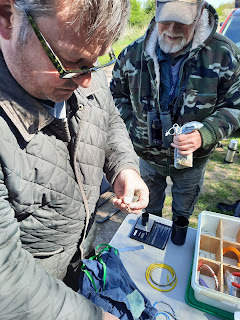 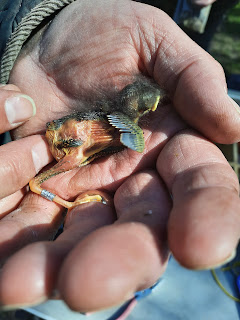 Ringed Robin Pullus
If anyone is interested in joining us or coming to visit, feel free to contact me via 25pnorrie@gmail.com. It should be an interesting year as we have already ringed a couple of unusual species, and it follows three excellent ones!

Just a quick note as the wind whistles around us... annual report for what is generally held to be our third best ever year (up against some stiff competition from recent years) is now available on www.stanfordrg.org.uk/srgstats/2021-annrep.pdf

Otherwise we are scrub bashing until the end of March, all are welcome to join us. 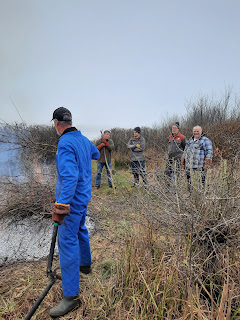 How many men does it take to light one fire?

Finch Ringing on the Top Road

Due to the Beech nut failure in 2021, we have been laying down Black Sunflower seeds under the Beech trees near the entrance to the dam at Stanford reservoir.
Bramblings are a brightly coloured Scandinavian finch closely related to the Chaffinch and a regular winter visitor to the UK, but not necessarily Stanford. In recent weeks there have been up to 20 reported feeding among the Chaffinches, but that is nothing compared to some flocks of several hundreds reported at other sites in the Midlands.
On Sunday 30th January, Mick, Theo and I took advantage of the short spell of good weather to spend a morning ringing on the 'Top Road'. It was a cold misty morning on arrival and we quickly set up a line of four nets. Soon after the mist cleared, finches started to gather to feed on the road and grass verge in good numbers of up to 50 birds at a time.

A handful of Brambling could already be picked out amongst the numerous Chaffinches. Our first visit to the nets took us all by surprise when we found 10 Bramblings, our highest catch since the winter of 94/95! 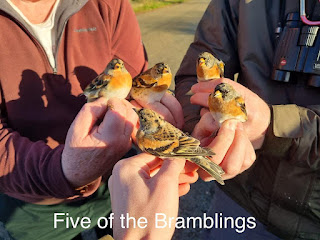 We caught another two by the end of the morning, along with 15 Chaffinches, one Goldfinch, one Icelandic type Redwing, one Blackbird, four Blue Tits, two great Tits and a retrap Nuthatch. 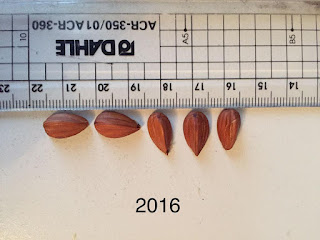 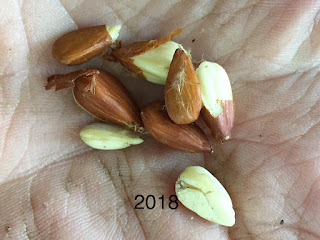 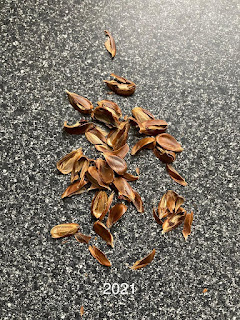 As you can see from the photos, above, occasionally there will be a bumper crop when they will be almost peanut size. These are called 'mast years' and should occur every 5-10 years.

We are now the proud possessors of two new bespoke spanking new Sand Martin Cabinets at Stanford Reservoir, with room for 96 pairs. The main funding for this came from Tarmac's Landfill Communities Fund, plus a 10% contribution from the SRG. The project was supported by Severn Trent, so thanks also to our ranger Ian Martindale and to the Senior Biodiversity Manager Zara Frankton who have encouraged us throughout. We chose a site which is currently underutilised with expansive views over the water, 10 minutes walk from the dam carpark, heading towards Blowers' Bay: 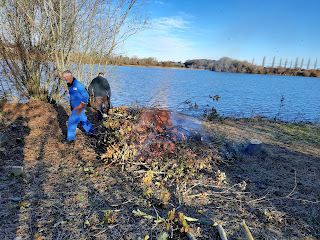 Preparing the site
The cabinets were supplied by Green Future Building, a Social Enterprise company. The van arrived on the 30th November, and promptly sank into the Stanford mud. Many thanks to Ian Martindale who spent an unplanned morning ferrying parts along the track for construction in his 4 by4 and thanks also to Chris Begley who was dragooned into action. 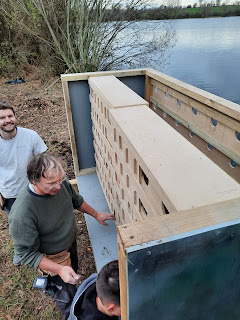 Under construction, showing the chambers for nests 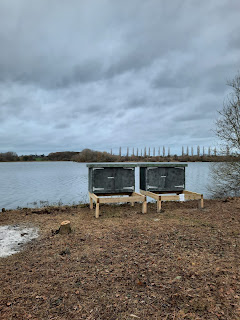 Completed, looking towards the Point
Despite this setback, the banks were completed on the same day, finishing by 1500. The grand unveiling took place on 16 December, a bright point in an otherwise rather grim year. Mince pies and mulled wine were supplied, but everyone behaved themselves. Present luminaries included Mick (Group Leader), Adam (Secretary), Dave (Treasurer), Dawn (SRG member), Mike Alibone (ex Northants County Recorder and blogger), Ian (ST Ranger) and Chris Hubbard, local birder to the gentry. Special thanks to Jamie Prpa of Tarmac, without whom the project could not have proceeded. 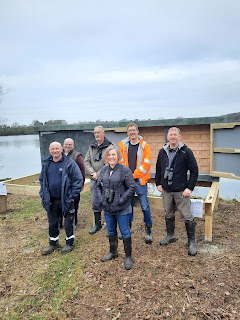 From left to right: Ian, Mick, Adam, Dawn, Jamie, Dave
Come March, we are looking forward to the arrival of our Sand Martins. Fingers (and any other relevant parts) crossed that they take up residence, a great boost for biodiversity at Stanford!
Posted by Peter N at 15:29 0 comments

'All the leaves are brown, and the sky is grey'; well that's about the only similarity we have with the Mamas and the Papas, but the autumnal winds have picked up and it has been wet too. Now that Adam our eminent group secretary has retired, he and Mick have been working hard at mid week ringing, in addition to our regular Saturday sessions. In September we ringed 2248 birds and in October 937, reflecting the departure of our migrant warblers. On the other hand we are now starting to get decent numbers of Redwings and a few Fieldfare to boost totals. This is also a good time of year for rarities, but the winds have been all wrong! Ideally they would be from the north-east, bringing birds down from continental europe, but sadly they have been largely from the west, blowing not much in from the Atlantic (apart from rain). However, we still have had some if not actually rare, then certainly unusual birds for the site, turning up in our nets. These include a Skylark, Magpie and Kestrel, which have helped to increase our annual species account to 59. All birds are good, but saving the best to the last, we have also ringed a very nice male Brambling: 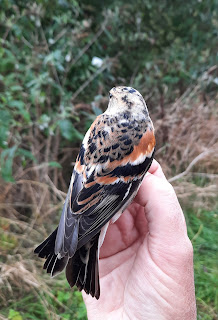 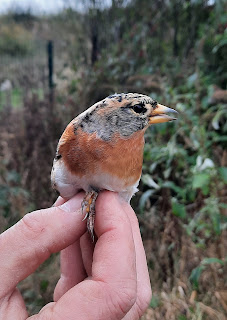 And lastly, a once per year, if we are lucky visitor, this spanking Yellow Browed Warbler: 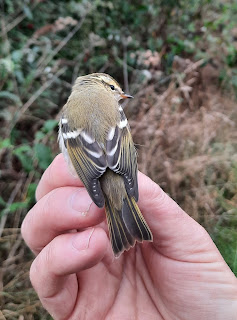 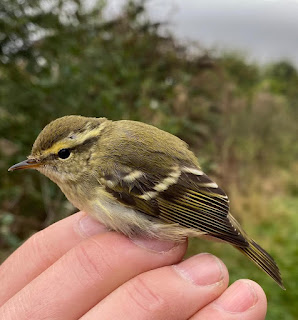 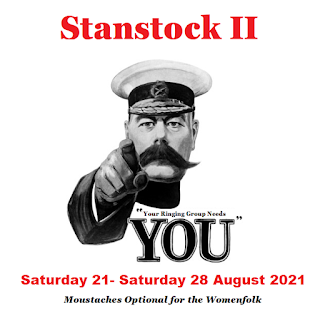 This was our second celebration of migration at Stanford Reservoir. The plan was to do some ringing every day in the last week of August, with a presence camping out each day; however in an almost exact repeat of last year, rain and wind made the first two days unproductive, so we concentrated on Tuesday through to the Bank Holiday.

Despite it being cool and with a distinct lack of sunshine the group responded magnificently and we ringed a grand total of 1,795 birds. Highlights of the week included French Night, a Chinese Takeaway and the Sunday carvery (plus some nice birds). Those sleeping under the stars (well, in tents anyway) included Dawn, Peter, Dave, Stuart, Ewan Kate and Adam. Mick, our glorious leader came out every day, and most members of the group had the opportunity to do some ringing. Nets were concentrated in Blowers Bay, access via the railtrack, plus occasional nets at point when required. 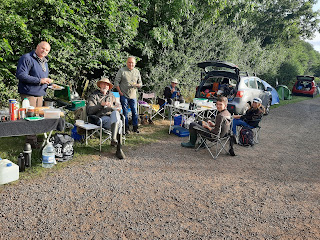 A fabulous collection of birds, and a quite splendid time was had by all. To finish the blog, here are a few pictures of some of the more unusual birds: 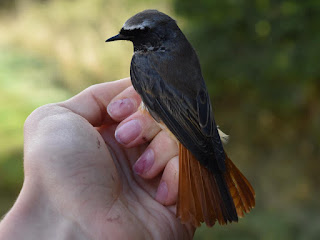 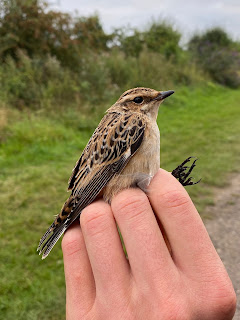 One of our two Whinchat 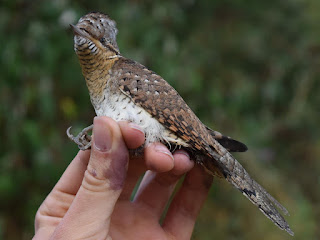 Back to normal weekend ringing, but congratulations to Adam, our esteemed secretary who has taken retirement, and so we expect to see his craggy features with the elderly midweek ringing gentlemen. Congratulations also to our new trainee Ewan too, who although new to the world of ringing was there for every day of the festival!

Mid Year Round Up

Time rushes on. We are now in mid July and despite some very mixed weather, ringing is starting to get busy. So far, we have ringed 38 species, with just over 1,000 new birds and over 500 recaptures. 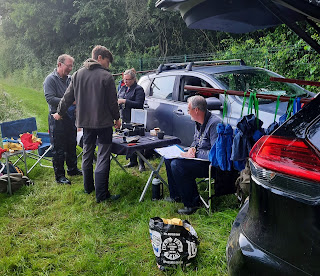 The mighty SRG at work: Dave, Ewan, Dawn and Adam 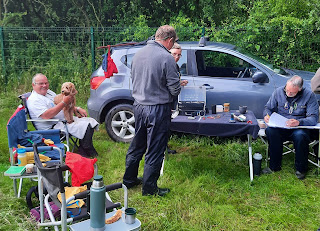 More of the team; Mick and Lucy taking a managerial role in proceedings.
On our last session (10/07/21), we ringed a total of 108 new birds plus 58 retraps. A little later than usual, we are starting to ring this year's juvenile birds, including Kingfisher, Chiffchaff, Grey wagtail, Wren, Dunnock, Robin, Chaffinch, Goldfinch and Reed Bunting, plus a selection of warblers, including our first Cetti's. We are still waiting for our first juvenile Grasshopper warbler, fingers crossed!
Posted by Peter N at 11:32 0 comments
Older Posts Home
Subscribe to: Posts (Atom)