Classic Rarity at the Res

Mick, Dave, Stuart and Peter N shimmied out on Saturday 12 October. We met at 0430 and put nets up at Stanford Reservoir from Safari to John's ride, and up the the railtrack. Numbers of birds have settled down now we have weathered the waves of migratory Blackcaps and Chiffchaffs. Instead, we are starting to enjoy our winter finches, so we ringed Goldfinch, Greenfinch and a solitary Lesser redpoll. We also ringed five Blackbirds, which are likely to be migratory. Anyhow, by far the most exciting bird of the day (as predicted by me in my previous log!), was extracted by Dave from the 30' net running along the edge of Oak ride: 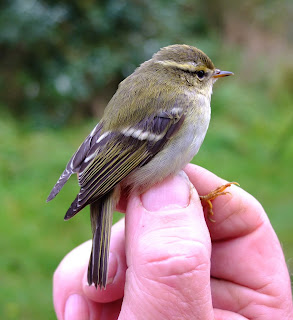 This Yellow browed warbler was ringed by Stuart, a new bird for him! This was only the fourth YBW to be ringed at Stanford (readers of the blog may remember we ringed one last year). That was on the 10th October, so there seems to be a tight time frame for their arrival at the res. For non birders, they may not seem too exciting, being quite similar to the more familiar Chiffchaff. The two wingbars identify them as being a different species, but they are still part of the Phylloscopus genus; in this case P. inornatus. Note too the pronounced yellow supercillium which almost met its counterpart at  the back of the head and gives the bird its name.

Totals for the day were a leisurely 77 new and 12 retraps. Anyway, off to the White Hart, where strangely enough it was Stuart's round! Firecrest next...
Peter N
Posted by Peter N at 14:39