Mick and Peter went ringing on Thursday 17 July on a rather blowy damp day (in Scotland we might say it was a bit dreich). Anyway, at 0430 nets were put up from Apple to Oak. We were pleased to find good numbers of juvenile Phylloscopus warblers plus a selection of the usual suspects (as per Dave's log, below).
Anyway, around 0900, I trundled off to extract from Church (a single 60' net). A couple of warblers as usual. But hang on... a woodpecker in the net, black and white, with a red cap. Nothing unusual in that, we usually have two families of Great Spotted, one at the feeders on the Northants side, one on the Leicestershire, always nice big colourful birds with lots of personality and very sharp beaks. However, this seemed a bit on the small size, maybe about the size of a greenfinch. Small... woodpecker... could it be? 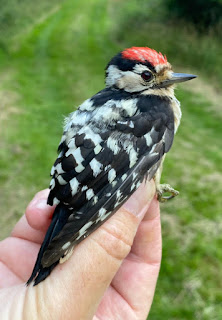 Yes it could- unbelievably it was a Lesser Spotted Woodpecker. This was only the third ever at Stanford, and the first since 2000. A really smart little bird, complete with red crown and ruby red eye, this was an adult male : 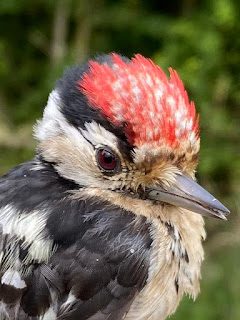 Fortunately we were able to share the find with our resident birder Chris H who, after being treated for shock, kindly provided the pictures. This is a phenomenal bird. It is a red listed species with about 800 pairs in the UK. I never thought we would get one at Stanford. As an adult male of a non migratory species it has presumably bred near to the reservoir, but we haven't had any local sightings for... ever! Eyes peeled from now on! After a horrible start, 2020 is turning out to be a species rich year, I wonder what could be next?
Peter N
Posted by Peter N at 11:19