A Little Something for Xmas

People would be wrong to think we only catch thrushes at Stanford in December. Admittedly, 48 of the 50 new birds ringed today were thrushes... but amongst the other (two) birds was the 51st species to be ringed at the Reservoir this year, a Little Owl... 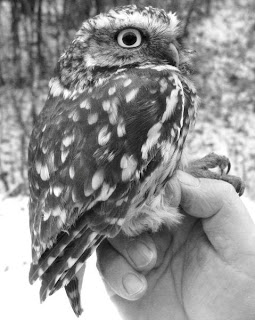 As the snow is now falling it is time to update the blog with the results from the last couple of ringing sessions.
Mick visited the res on Monday and managed a very credible 33 Redwing, 19 Fieldfare, 2 Blackbird, 1 Song Thrush and 1 Reed Bunting.
A crisp and frosty Tuesday morning accompanied by a beautiful lunar eclipse saw Mick and Adam push the Redwing total over the 600 milestone with a further 58 ringed. A dozen more Fieldfare, 3 Blackbird and 2 Reed Bunting completed the days ringing.
With October Redwing weights being mid 50's to low 60's, it was encouraging to see that they were predominately mid 60's to mid 70's with only the odd one in the high 50's to low 60's range.
Posted by AGH at 16:33 2 comments

After Masai Mick's midweek effort in raising the Group's annual total of Redwing above the 400 mark, the question we were all asking was "Can we take the total to 500 before the New Year?"

The question was rapidly confined to the waste bin after Friday's session:

AGH, having worked extensive shifts all week and being completely oblivious to his family's needs of assistance with the festive preparations, decided to team up with MJT for another early morning sortie to Stanford in the search for even more thrushes.  Three hours later, having duly ringed one Song Thrush, four Blackbirds, thirteen Fieldfare and one hundred (yes - 100 !!) Redwing it was apparent that the Redwing target had been set too low.

With the Group's ring stocks now dwindling faster than the Council's grit supplies an urgent call to BTO sales was clearly needed in order to remedy the situation and I was promised that the BTO Elves would package and post my order without delay.

With not a trainee in sight, the three of us met at the usual hour of 0600hrs and those of a superstitious mind will realise what was to come - a poor catch of a couple of Fieldfare, 3 Blackbirds and 15 Redwing quickly brought us back down to earth.  However, as it was pointed out, not so very long ago we would have been pleased with 15 Redwing as an annual total. Cue to retire to The White Hart for refreshments in front of the log fire!
Posted by Jacana at 17:30 0 comments

With dreadful weather forecast for today, the troops were duly informed that today's ringing was cancelled.
﻿ ﻿

Our Dear Leader, MJT (aka "Masai Mick" for reasons yet to be divulged) awoke early, ostensibly to watch the cricket.  However, he decided that a couple of hours ringing was actually possible before the weather broke and duly slipped over to Stanford.  He ringed 21 new Redwings and was back home before the rest of us had stirred from our slumbers.
His sterling effort increased the number of Redwing ringed this year at the site to 402, making it the second most ringed species there this year - behind the 483 Blue Tits
﻿
﻿
Posted by Jacana at 14:35 0 comments

The 114 Redwings ringed at Stanford this week took our current annual total for Redwing to 355 new birds - more than double the combined annual totals for the last 30 years.
﻿﻿﻿

An additional 23 Fieldfare, 12 Blackbirds and 3 Song Thrushes contributed to the 167 new birds ringed this week. Two Goldfinches, a Reed Bunting, a Goldcrest and a female Blackcap were also welcome additions for the week. 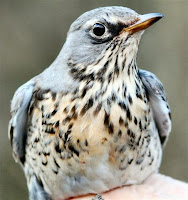 However, a party of 15 Waxwings on Friday 10th successfully evaded the nets.
Posted by Jacana at 19:45 2 comments

A female Merlin bouncing the net would have been a new ringed species for the site but we still managed to have a good morning with:

One of the retrap Blackbirds was this individual that, with its deformed bill, we never thought we would see again. It was originally ringed on 4th September whilst it was in post juvenile moult.
Posted by Jacana at 14:04 0 comments

A busy week targeting thrushes resulted in a catch of 110 new birds, including 75 Redwing and 10 Fieldfare.

Unusually for us, the retrap numbers also included 3 Redwing, previously ringed by ourselves during the past few weeks.