A cool, overcast morning greeted Mick, JC and myself when we arrived at Stanford today.  Ringing from the Bench to the Point in anticipation of a reasonable catch we were quickly disappointed. Another slow morning so typical of the year thus far, resulted in just 24 new birds ringed. There are simply very few birds about at present.

However, we did manage to ring at least one of each of the nine breeding warbler species at Stanford Reservoir (Chiffchaff, Willow, Sedge, Reed, Blackcap, Garden, Grasshopper, Whitethroat and Lesser Whitethroat). That got us wondering - when did we last manage a 'full set' of warblers?

The answer is we did it once in 2011 (23rd July), three times in 2010, and five times in 2009. In fact today's achievement was the 26th time we’ve ringed all our breeding warbler species in one day... but it has never been done with so few birds around!


A Marbled White butterfly, only the third record at Stanford, was the morning's highlight (we don't have a picture of this as JC does not move as fast as he used to...)
Posted by Anonymous at 18:08 0 comments

Yesterday Masai Mick and I arrived at Stanford at 0445 hrs and quickly erected several nets in the 40 foot rides from the reservoir dam towards the location of the Wildlife Trust's birdwatching hide. Previously known as "The New Hide" it was recently demolished on health and safety grounds and the location will be known for evermore as "The Old Hide".


We were treated to a fabulous sunrise as these images attempt to show: 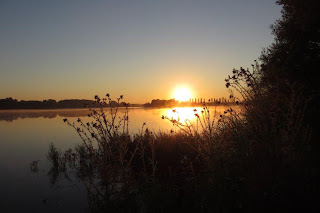 With not a breath of wind, the reservoir was flat calm and, dare I say it, the weather was just too hot and the sky too clear for a productive ringing session.


We managed 26 new birds (plus 10 retraps) which included the second juvenile Lesser Whitethroat of the year, a couple of juvenile Reed Warblers with prominent tongue spots and a juvenile Robin.

We also ringed two juvenile Sedge Warblers which were sporting very well marked "necklaces".  Most juvenile Sedges have a line of small dark spots starting at the sides of the breast which vary both in intensity and the number of spots - usually one or two spots at each side of the chest is the norm but these two birds had as well defined necklaces as we have seen for a long time.

With the incessant poor weather since April there has been very little to blog.  Most planned ringing sessions at Stanford have been either cancelled, curtailed or produced very few birds. June 2011 resulted in 846 new birds being ringed whilst this June we managed just 307 - a total that was boosted with 46 Swallows from an adjacent stables to which we were given access for the first time (thanks Helen).
The weather forecast for yesterday was excellant and so the prospect of a good catch was very real - if only there were birds about.


Nets were erected in the early morning mist: 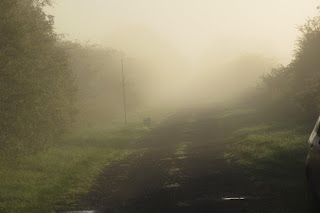 which cleared within twenty minutes: 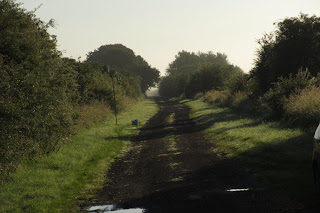 Mick came back from the first round of the nets and triumphantly thrust a bird bag into my hand - inside an adult male Redstart! We have ringed only 16 at Stanford since we started in 1976 so this was a very good bird and surprisingly the second this year as we ringed an adult female in June.

The total catch for day was 65 new birds with 20 retraps - our best day so far but well short of what we would normally expect at this time of year.

With good weather predicted for next week, a mid week session is planned.