With varying numbers but some days as many as 20 Short-eared Owls being reported throughout the month at a site not too many miles from Stanford, Ed finally succumbed to the temptation, went to see them and managed a photograph.
Here is his report:
On Sunday 20th November I finally managed to take a trip across to the site at Maidwell in Northants to see if I could see the abundance of Short Eared Owls that had been reported there.
The day had been quite misty and following a break in the weather I headed off mid afternoon. I chose to walk the last mile, although you can drive, and on approaching the site I saw my first Shortie take to the wing from a tree not too far from the track that I was following.
The site had pockets of photographers dotted along the track so finding the right spot to stand wasn’t too difficult to work out.
I didn’t have to wait long either, in less than two minutes there was one flying around, swooping down low over the scrub and periodically landing. After that they seemed to be everywhere, but the most I counted at any one time was four. At one point two of the owls had a dispute and a mid-flight brawl but unfortunately they were too far away to photograph.
I was however treated to one flying quite close and passing within 30 metres or so as it went to the field behind to hunt up and down the hedgerow. 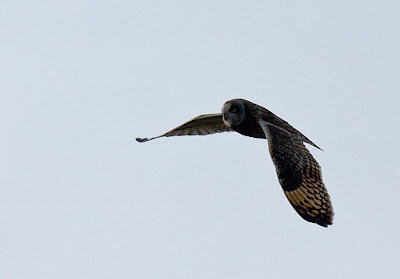 My visit was quite short lived, after only being at the site for half an hour the fog rolled back in sealing off any chances of seeing the owls any more.
Posted by Jacana at 18:50 0 comments

A Dutch Control and other Goodies

The perfect ringing conditions continued at Stanford for the last two weeks with overcast grey skies, reasonably flat calm mornings and no rain but there are no birds.  The Hawthorn bushes are laden with larger than normal berries awaiting the winter thrushes that so far have only appeared in small numbers with flocks generally consisting of ten birds or less.

Mixed finch flocks are also a bit scarce as the expected Chaffinch numbers have failed to materialise so far, despite there being a reasonable harvest of Beech mast on the "Top Road" [the road on the Leicester side of the Reservoir from which the main entrance to the Reservoir can be accessed].

On Monday 7th, Intrepid Adam managed a solo session and ringed 23 new birds which included 11 Tree Sparrows and 3 Yellowhammers (always a good bird for Stanford) and amongst his 44 retraps was well rewarded by controlling our first Dutch Robin (NLA AT92405) - yes thank you - we have heard all the jokes about Robin Van Persie and 'was it trapped in the Dyke net ride?'

Masai Mick and I ventured out the next day to target any thrushes that might be around - we managed 8 new Redwing and 7 new Goldfinches amongst the paltry 23 new birds (with 10 retraps).

On Saturday 12th practically the whole group turned out such that we were able to split the effort with Masai Mick, Richard, Debbie and Emma ringing at the Top Road whilst, Adam, Webmaster Mike, Ed, Dawn and I netted from the 'Berries Boundary net ride' round to the 'Dyke Boundary ride'.  This action proved worthwhile as a total of 93 new birds were ringed and a further 49 retraps processed.  The 63 new birds on the Top Road primarily consisted of 25 Great Tits, 15 Blue Tits, 15 Chaffinches, a Goldcrest and yet another Treecreeper whilst a Nuthatch was amongst the 30 retraps.  Meanwhile the 'A' Team based on the old Railtrack sought quality rather than quantity and their 30 new birds consisted of 5 Redwing, 2 Fieldfare, [Ed christening his new pliers with his first ever Fieldfare], 2 Yellowhammers and a Green Woodpecker - the second this year but only the 20th that we have ever ringed at this site. 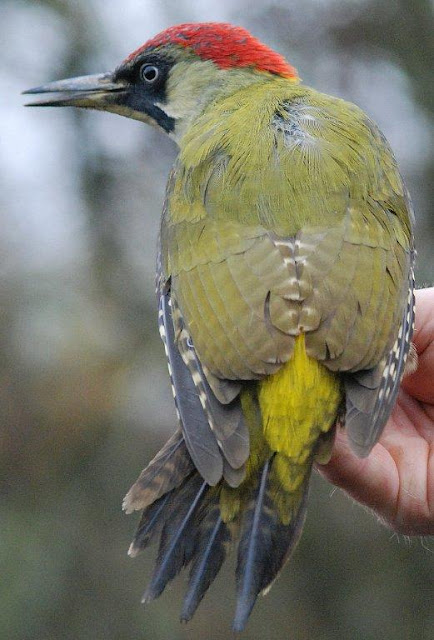 Masai Mick and I ventured out once more on Tuesday 15th and our new birds comprised of singletons of Wren, Woodpigeon, Great Spotted Woodpecker, Goldfinch, Coal Tit, Blackbird, and Song Thrush with 6 Tree Sparrows bringing the total to 13 new birds.  However the effort was worthwhile as amongst the 16 retraps was a control adult male Lesser Redpoll (is L082272 yours?)


Intrepid Adam and Webmaster Mike tackled the Top Road today and their 31 birds consisted of 9 Longtailed Tits, 4 Blue Tits, 6 Great Tits, 4 Chaffinches and yet another Treecreeper whilst their 29 retraps were predominantly Great Tits.

The totals for the period:


Reasonable totals resulting from a good deal of effort - thanks to all involved.
Posted by Jacana at 21:18 1 comments

We had pretty much perfect conditions for ringing last week at Stanford - muggy, overcast grey mornings with little or no wind and so the results of my three sessions on Tuesday (with Masai Mick & Webmaster Mike), Thursday with Masai Mick and on Saturday with Adam and trainees Ed, Dawn, Debbie and Simon were a tad disappointing. (Emma's car decided that winter had already arrived and refused to start and so, after half an hour of waking the neighbours, she decided to give it best and texted to say she would not be coming).

Without the Goldfinches, Tree Sparrows and Lesser Redpolls in reasonable numbers there would have been very little to report at all.

The totals for the week are:

Masai Mick reflects on the last month
A ‘scintillating’ September has been followed by an ‘outrageous’ October, a month in which we’ve ringed 933 birds of 31 species.
Warblers continued to move through Stanford at the start of the month in reasonable numbers.  They then stopped for a week or two, before a few more Blackcaps appeared.  We’d like to think these later birds are of German origin.  Wouldn’t it be wunderbar if someone would recover one to confirm the theory!
During early October, Blue and Great Tits started to build up again at the feeding station.  We suspected that this was due to post juvenile dispersal and, on cue, we got a control Blue Tit (L263891) on the 5th followed by another (L263932) on the 14th.  Both birds were from the same series of rings and with a bit of detective work determined they had been ringed at Geddington near Northampton.
We’ve also had an impressive passage of finches, notably Greenfinch (149 ringed), Goldfinch (85) and Lesser Redpoll (94).  None of the ringed birds were subsequently retrapped.  On the 29th, we controlled a Lesser Redpoll (P545435), which we have discovered was probably ringed in Telford.  We also controlled a Chaffinch (Y184175) on the same day (our sleuthing skills deserting us on this ring, so we’ll just have to wait for the BTO to tell us who’s it is – unless you know?!)
We must also mention the good old Tree Sparrow - this month we have ringed 128 of these birds and also controlled a colour ringed one (TR27180).  It’s a record year for this species at Stanford – we should soon comfortably reach 500 birds ringed.
But what has happened to the thrushes?  We saw a flock of 1500 Redwing mid month but very little since.  Blackbird and Song Thrush are non-existent whilst we have only had the occasional 50-100 Fieldfare overhead.
Our October ringing totals can be viewed here October Stats
Posted by Jacana at 20:16 2 comments
Newer Posts Older Posts Home
Subscribe to: Posts (Atom)