Winding up the CES and Breaking (another) Record

On Tuesday 3rd September, Mick, Dawn and Peter N met up to complete the final CES session for the year. We have had such a storming season of late, that the day's total of 90 new birds plus 14 retraps seemed a bit humdrum, but it kept us busy and even allowed a tea break or two- a nice change.
As before warblers were very evident, it was notable that the emphasis had changed from Willow warblers to Chiffchaffs, and there were few Sedge warblers (in stark contrast to the previous week). Clearly we are entering into Autumn, soon it will be Redpolls and Redwing.
The standout bird was a single female Redstart. Not only a lovely bird in itself, but also the 16th this year, a new record for Stanford. 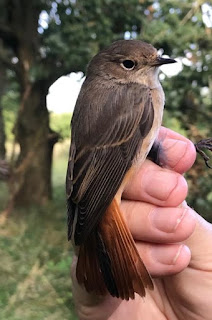 Who knows what further records we will break this year? The annual total must be a possibility...
Finally, there is a nice video of the group courtesy of our friend Graham Barker on YouTube: Summer's End With The Stanford Ringers
Enjoy! Peter N