Well I haven't put an entry on the blog for several months, so hear goes. Friday afternoon (23/11/18) myself and Adam met in the Leics car park at the res and with a view to catch Starlings in a roost in the Leicestershire reedbed.
We were set up in plenty of time and manged to catch a few Reed Bunting before the Starlings arrived. As dusk approached the Starling gathered and converged into a large flock of about 600-700 birds above the reedbed. Before dusk the birds started dropping into the reedbed, at this time a Marsh Harrier which we had seen earlier also decided to drop into the reedbed fairly close to the Starlings. we waited with baited breath, 'could we catch the Marsh Harrier?' Unfortunately not.
By the end of the session we had caught Starlings 4,Wren 1, Reed Bunting 4 (5) including a control.
Interestingly we caught  a Reed Bunting that had completely black Median and Greater coverts and Mantle. 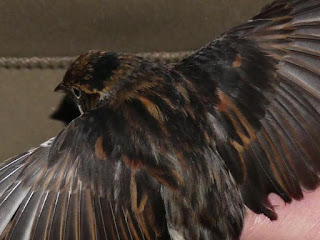 After packing away we decided that we would try dazzling in a field adjacent to the reservoir. So with the kind permission of the local land owner we set off for a couple of hours dazzling and were rewarded with 2 Snipe. (this being a new annual record for the group). 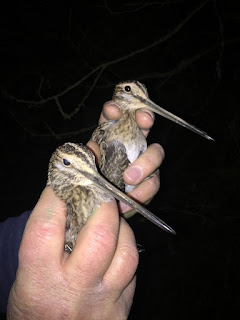