Deb’s Debut and a 30 Year Wait

Meeting at 0500hrs on Saturday, Masai Mick, Adam, Ed, new recruit Debbie and myself were joined by Northamptonshire Bird Recorder, Mike Alibone, making his second visit to a ringing session with us, we were disappointed to find that the morning’s forecast of no rain until the afternoon was wrong again.  However, the light drizzle quickly cleared and we soon had our nets erected in the area known as “Berries to Orchard” plus a 30 footer near our base on the Railtrack.
A reasonable morning followed with 76 new birds ringed and 28 retraps processed with Whitethroats (23) and Blackcaps (25) dominating the catch.  After our record year in 2010 for some warbler species it seemed unlikely that we would top any of them this year but we have – new Whitethroats are now at 453 well ahead of last year’s record breaking 330 and Blackcaps have just reached a new high at 266 having nudged past the 263 figure from 2010.  Reed Warblers are also at a new high of 268 by beating the 2006 figure of 209 and additionally Linnets, which came from nowhere in 2010 with 71, have had a good breeding season at and adjacent to, the Reservoir and are currently at 120 new birds so that the last two year’s combined totals for this species have doubled the numbers ringed at the site since we started way back in 1976. 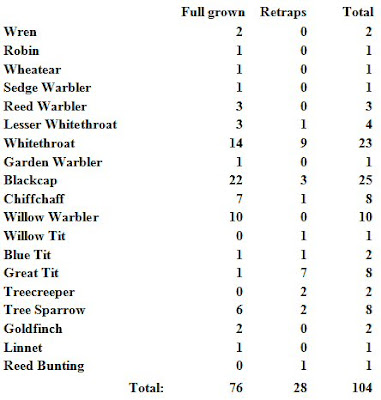 Debbie, showing great promise, marked her debut ringing tick with her first Whitethroat and went on to ably process five other birds once the initial rush was over and time allowed for her training initiation.
The excitement of the day was, without question, the totally unexpected trapping of a juvenile male Wheatear – only the second that we have ringed at Stanford – the first being nearly thirty years ago on 5th September 1982!
Mike’s account of his morning with us can be found  here
I make no apologies for uploading several photos of the bird!
photos jgc: 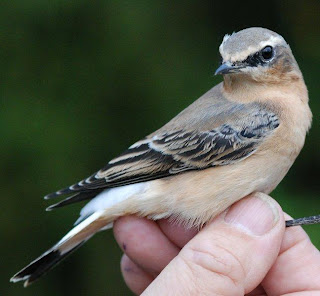 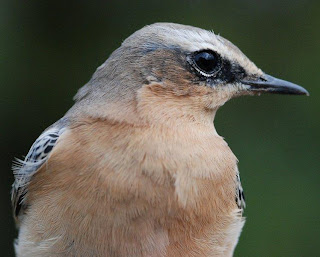 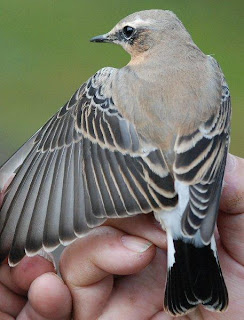 Thanks to Ian from Just Digital for the following photos taken at Saturday's Ringing demo:

Images taken by MAL can be found here
Posted by Jacana at 10:59 0 comments

SRG member Ed writes:
Saturday 13th August
The usual checking in time of 0430 hrs saw the arrival of John, Mick, Dawn, Adam (recently returned from holiday) and I at the entrance to the disused rail track.
This morning was different for a couple of reason, firstly it is much darker now than usual and torches were needed to find the guys and poles for putting the nets up. Secondly, I had arranged for us to provide a ringing demonstration for my local photography group who call themselves Just Digital, so nine visitors were due to arrive at 0730 hrs. (For the Just Digital website: click here )
With a strong breeze and some patchy drizzle our first net round was poor indeed with only twelve birds being caught.
The weather did eventually turn for the better and the next net round saw our usual numbers return.  At least it looked as though we were going to have some birds to show our visitors.
I knew the photographers were going to be keen but the first one showed up some fifty minutes early, and the others were not too far behind! 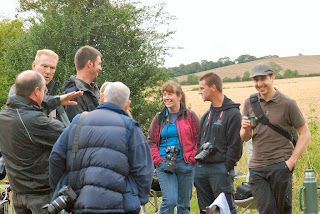 John did an excellent job of showing them the birds, giving them more information on each of the species and letting them photograph them. Between net rounds the cameras were focused on all the insects around including butterflies (Red Admiral, Speckled Wood, Gatekeeper), Dragonflies, Damselflies, Hoverflies, Bees and Wasps. 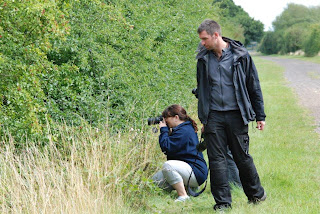 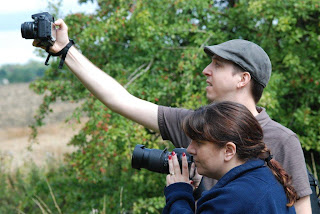 After a weak start the bird numbers soon padded out to the expected numbers. A total of 120 birds, 71 new and 49 retraps were processed.
Tree Sparrows (15 new, 10 retraps) and Whitethroats (13 new, 5 retraps) were the most numerous birds on the day and took our already record breaking ringing totals for this year to 252 and 353 respectively. 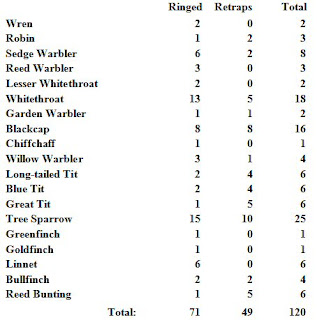 Amongst the birds that caught the eyes of the visitors were Lesser Whitethroat, Bullfinch, Greenfinch and a juvenile Goldfinch.
One of the visiting photographers, Debbie, was so impressed with all that was going on that she was soon asking about joining the Ringing Group as a helper. Not long after that Debbie was asking about what was involved in becoming a trainee and, apparently, more than happy to meet us next Saturday at our later start time of 0500 hrs!
photos: jgc
Posted by Jacana at 12:55 0 comments

On a calm but slightly chilly morning yours truly, with Masai Mick, Dawn and Ed, erected nets from "Berries" to "Orchard" (see ringing map ) and managed a respectable 116 birds: 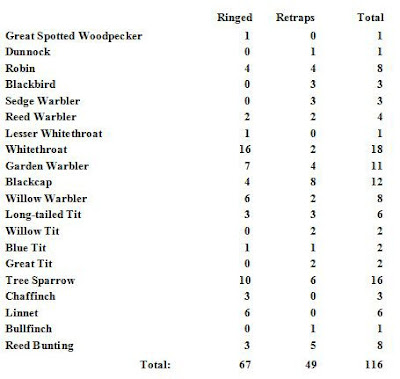 Ed, having recently decided to try his hand as a trainee, swapped his pen for pliers and with Dawn got to grips with the birds: 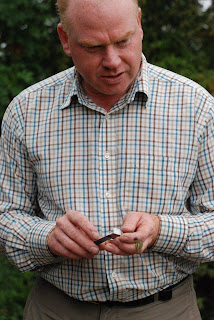 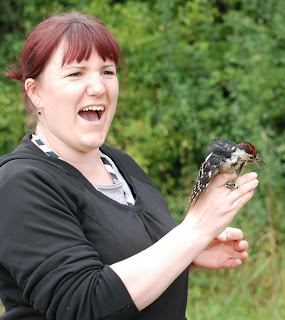 And our squirrel-proof feeders were topped up for another week: 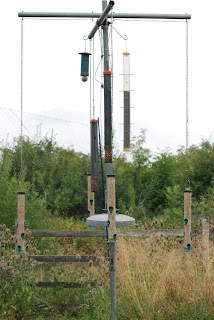 Meanwhile Mark Piper, on one of his regular birding walks round the reservoir, found an adult Black-necked Grebe in winter plumage and a party of 10 Little Egrets which were still present in the evening.

Our Leader reflects on the past month:


What a strange month this July has been at Stanford - starting and finishing with large catches but with relatively mediocre catches in between.  The first ringing session (2nd July) produced 210 birds (142 new, 68 retraps) and the last session (30th) 193 birds (129 new, 64 retraps).  However between these dates we struggled along, failing to achieve a 100 new bird day on any date.  Nevertheless we persevered and managed to grind out a record month with 1,546 bird processed and a total for new birds ringed of 972! That has to be impressive for a single in-land ringing site.
Warblers have had a mixed year to date with some marked differences in this July’s ringing totals compared to July 2010.  The rise in Sedge Warblers ringed, from 90 last July to 132 this month, probably reflects a genuine increase in bird numbers, whilst the Reed Warbler increase from 51 to 95 merely shows an increased effort on our behalf in the Leicester Reed bed this year.
Species in line with last year’s totals are Whitethroat, Blackcap, Chiffchaff and Willow Warbler.
Two warbler species give us cause for concern though, both showing more than a 50% decrease in numbers.  Lesser Whitethroat has declined from 26 to 11 ringed, whilst Garden Warbler has dropped from 65 to 30.  Following last year’s tremendous totals, we were hoping for a repeat performance, or even a further increase in breeding numbers of these species, but it's not materialised.
On a brighter note we continue to have great success with Tree Sparrows with 104 ringed in July taking our annual total to date to 227.  Linnets have also maintained their growth in population.
To see a complete totals list for the month, follow this link.July Totals
MJT
Posted by Jacana at 08:36 0 comments
Newer Posts Older Posts Home
Subscribe to: Posts (Atom)