Well Mick has returned from Canda although the wind has not changed direction the number of birds have slightly increased. The whole group managed to make the 4.30 start and greeted Mick back from Canada. We spilt the group in two and Adam, Dawn and Peter went off checking all the nest boxes and ringing the pulli. Jo, Mick and myself carried out the CES. In between net rounds Mick showed Jo and myself his holiday snaps. Jo was quite impressed with Mick in his budgie smugglers, lol, but more impressed with the fantastic photographs of some of the birds he had processed while he was at Long Point. It's still very quiet at the reservoir but at the end of the session we had ringed 17 new birds and processed 40 re traps including the resident male Cetti's. Adam, Dawn and Peter returned with a total of 143 pulli ringed and a re trap adult Swallow.
Posted by David at 20:41 0 comments

Although ringing has started at Stanford the number of new birds arriving has been very small. We feel this is probably due to the constant North Easterly winds.Our summer visitors are just not here in numbers yet. Our  best news is that we have a pair of Cetti's Warblers resident at the reservoir. We carried out our second CES session last Saturday and only managed to ring 6 new birds and processed 31 retraps. This was the lowest CES return in the 3yrs of running the project. We put this down to the strong winds last Saturday. So this Saturday the forecast was excellent for ringing and we decided the have another go at the CES. Unfortunately there was still very little bird movement or numbers and as a result our numbers were even lower with 9 new birds and 25 retraps. However what was encouraging was what appears to be at least 3 cuckoos at the reservoir. To Adams delight after struggling to the res from working nights he was rewarded with being able to ring a female Cuckoo, something he has been waiting for, for the last 15yrs. To add to the delight Peter (our new trainee) was able to process an adult male Sparrowhawk one we had ringed as an adult in 2012. 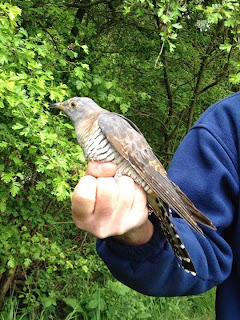 Mick returns from his ringing at Long Point Bird Observatory this week, so hopefully the wind will change direction and our number of birds will increase.