Adam and myself decided to have a Moth night in the car park at the end of the reservoir  near the dam. A chance to have a few beers and bacon rolls. I had packed the bacon and rolls and Adam was due to bring a frying pan. We got there about 18.45 on the Friday evening, my lad Angus had decided to come and help. We put some nets up from the car park  towards the old hide. Mick turned up and watched as he had shorts on and didn't want to scratch his delicate legs on the brambles. We put some more nets at the back of the dam and one across the wear. As the wind was forecast to get to 20mph by 8 in the morning we didn't want to put too many nets up. We carried out a couple of net rounds before furling the nets at dusk.
We then concentrated on setting up the moth trap and settling down to see what we could catch. The temperature dropped quite alot and there were not many moths around. We retired to our various beds about 11, knowing we needed to be up by 4 to unfurl the nets. I set off one way to sort the nets, Adam the other. As I unfurled the nets all I could think about was my forth coming bacon roll.
On returning to base I started to get the bacon sorted and asked Adam for the frying pan only to learn that he had forgotten it. DISASTER, no bacon rolls, so I have to settle for a coffee, (not quite the same).
We totaled 51 moths of which we had 14 species including Poplar Hawk Moth and Chocolate Tip. 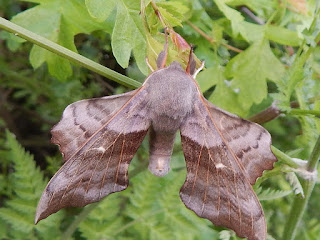 The wind got up at 8 but we continued ringing until about 10.30. In total we had 24 new birds and 25 retraps, the highlights being 5 new / 6 retrap Reed Warbler and 4 new and 1 retrap Linnet. 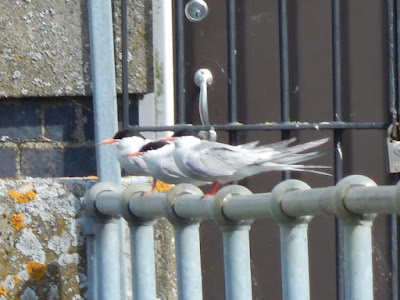 While we were ringing at the dam end, Mick, Jo and Peter had started at the rail track end at 4.30 that morning.
They seriously suffered from wind and only had a few nets up.
Totals from Railtrack end were 9 new including 6 Tree Sparrows and 7 retraps including a Great Stopped Woodpecker.