The BTO has confirmed that we can go ringing again, so not ones to let the grass grow under our feet, the SRG has already trundled forth thrice. Numbers have been quite good for the time of year, although unsurprisingly quite a lot of our birds have been re-traps of our resident species- we seem to have been specialising in Dunnocks and Blue Tits.

However, some of our migrants have returned, and we have been ringing good numbers of Chiffchaff, a couple of Blackcaps and Willow Warblers and a solitary Common Whitethroat. Two SRG records have been broken already for 2021! Firstly PMN trapped and ringed two Stonechats at the dam in February, which is an annual record for Stanford: 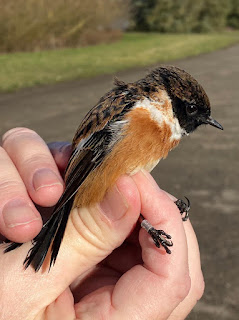 Secondly, on Saturday 10 April Dave extracted a lovely male Redstart from Safari, which is the earliest record for the site, two birds having been ringed historically on the 16th, in 1977 and 2002. Otherwise, these are almost exclusively an autumn species for us. 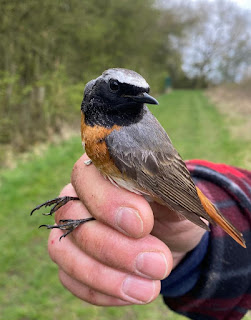 A most beautiful 5 male redstart! Excellent start to the year.

PS Our Bearded Tits have sadly moved on- no breeding records for this year.