Last night Webmaster Mike, trainee Ed and myself travelled north of Leicester to a site where the Stanford RG has been ringing Barn Owl chicks for the last five years.  Four eggs laid way back in April had hatched in May and produced four healthy chicks. We arrived at 1900 hrs to discover that one chick had completely vanished - almost certainly the recent long spell of frequent rain showers had prevented the adults from providing sufficient food and the oldest chick's survival instincts had kicked in and it had turned on its smaller sibling and devoured it - a practice that was brought to the attention of a shocked nation some years ago in BBC's Springwatch programme.

Mike did the honours of collecting the chicks from the nest whilst a happy Ed ringed his first owlets and they were soon back in the safety of their nest box just as the rain started again. 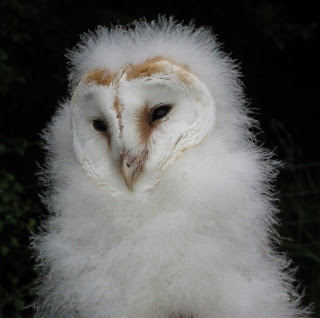