After having our 2nd best start to the year last year with 1400 birds ringed by the end of June we were hoping for a similar start this year so by achieving a total of 1391 we have done really well when you
consider the incessant wind we have had to endure from the North. This has made things quite difficult for us as our site is quite exposed when the wind is from this direction. However we have persevered and
achieved better results than it felt. Surprisingly we caught exactly the same number of species as last year with 39 although 9 of these were different to last year. It's been a real funny year with most species being caught in smaller numbers than last year, some of which are really unexplainable. Wren and Robin have been caught in similar numbers but Dunnocks are down from 43 last year to 24 this year. The Tits are a bit up and down with Blue Tit up from 231 to 294 and Great Tits remaining static whist Long tailed tits are down from 42 to 25. Tree sparrows have increased dramatically from 141 to 234 .... a brilliant increase in numbers!
Apart from Chaffinch, all finches have shown a dramatic decrease in numbers with Bullfinch and Linnet being the worst with a 75% decrease. The warblers are all over the place with Reed and Sedge showing big
increases while Lesser Whitethroat ,Blackcap, Chiffchaff and Willow warbler showing the opposite with big decreases. Whitethroat and Garden warbler numbers look stable. This year has also seen a new breeding species for the reservoir with up to 3 breeding female Cetti's Warblers caught since May and three 1j's caught over the last 2 weeks, so overall not to bad a start to the year.

Last Friday evening Adam and myself went over to the Leicestershire side of the Reservoir to carry out a moth night. The second of the year. We got there about 18.30 and decided to set the nets in the reedbed ready for Saturdays ringing. Mick and Peter were due to come at 4.30 the next morning to try some new rides in the paddock area again on the Leicestershire side. Dawn had been ringing on Friday with Jed Andrews and chasing Egyptian Geese and was unable to come out with the group. Jo had decided a wedding was far more important than ringing (ha ha), so there was only going to be the 4 of us in the morning.
After setting the nets we set up the moth trap far enough away from the vehicles so it didn't disturb our sleep.Then we returned to the nets, extracted the birds furled the nets and processed the birds. Most were Reed Warblers as you would expect.After finishing with the birds we went to check the moth trap and to top up the generator. It was still very light so there were not many moths around. We left it running and returned to base for a well deserved beer and sleep.
Up early at 4.15 we went and unfurled the nets before returning to base and Adam produced from the back of his car bacon, rolls and surprise surprise he had remembered the frying pan. Fantastic. We quickly checked the moth trap to find out that the generator had stopped working sometime in the night. Another problem for Adam to sort out.
Mick and Peter arrived at 4.30 and set up their nets.We had 2 bases not in view of each other. So myself and Adam carried on as normal ringing extracting etc. About mid morning both our phones rang we were busy extracting birds so ignored them. As we got back to base they went again. It was Mick. Adam answered. Mick was apparently dancing around cheering like a kid. He had caught a French ringed Sedge Warbler.
Mick really is such a jammy git, if there are controls to be had on the site you can guarantee that Mick will process 90% of them.
Any way we carried on ringing and then check the moth trap. Unfortunately there was only a few in there.
Drinker 2, Straw Dot 2,Burnished Brass 2, Brown Rustic 2, Plain Golden Y and Marbled Minor 2.

By 11.00 we had packed up the nets and were check the reedbed for nests and pulli.. Although we only found one nest with pulli we did find several with eggs.

All in all a very successful ringing session returning with 46 new and 38 retraps, mostly Reed and Sedge Warblers although we did catch young Kingfisher which is always nice.

And to top it off Mick had worked out how to use the camera on his phone and had taken this wonderful picture of this Dragonfly. Any suggestion for names? 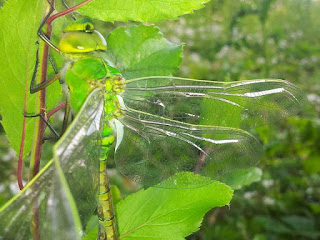 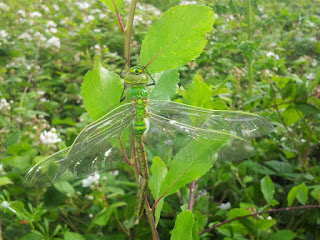