From Russia with Love

We are still not able to ring at the reservoir, but our Sightings Officer Chris H, lives very near and still attends to his regular birding. Here is his account of a recent encounter: 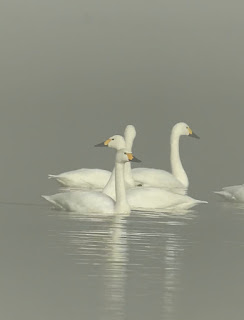 Saturday 6th February was a very still day. As I arrived at the reservoir for my daily walk the fog started to form and the whole place was very quickly covered in a dense blanket – not the best of conditions for checking for birds!

I headed off to the reedbed on the Leicestershire side of the reservoir. Having spent a short time there I made the decision to carry on despite the fog – after all the weather forecast was saying that it would clear by 10.30am.

As I made my way around past the dam there were some signs of the fog clearing. As I scanned through the ducks closest to me, I was drawn to a tightly bunched group of swans right in the middle of the reservoir although they were barely visible. My instinct told me that this was very unusual for the resident Mute Swans. As the fog began to clear further, I realised that I was looking at a sizeable group of ‘wild’ swans. They were either Whooper or Bewick’s, the latter being a very scarce visitor to the county these days.

One of the key identification features to separate the two is the extent of yellow on the bill which is very obvious and extensive (beyond the nostrils) on Whooper Swan. I checked each bird in turn and soon concluded that I was looking at Bewick’s Swans – 18 in total.

Each year Bewick’s Swans undertake one of nature’s greatest migrations, flying thousands of miles from the breeding grounds in the far north of Russia to Western Europe. Sadly, not all make it and numbers have plummeted over the last 30 years dropping by a third in recent times, with fewer than 21,000 left. They’re under threat from illegal hunting, lead poisoning, loss of wetland habitat, predation, and colliding with man-made structures (e.g., powerlines).

What were these birds doing at Stanford? They may have already arrived in the UK earlier in the winter and could have been moving from the east coast to feeding grounds in the south west such as Slimbridge or vice versa. The fog may have interrupted their journey and they found safety until being able to continue. They could also be birds that were wintering in Europe and have been pushed this way due to the exceptionally cold weather currently.

The birds were only visible to me for around 15 minutes but it was amazing sight to have that number of Bewick’s in one group, all showing well and calling to each other. It was quite a sight when they all took to the air and headed off.

The last records for the reservoir were both in 2019 – a group of 9 and 2 in November and December. 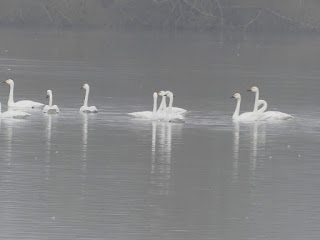